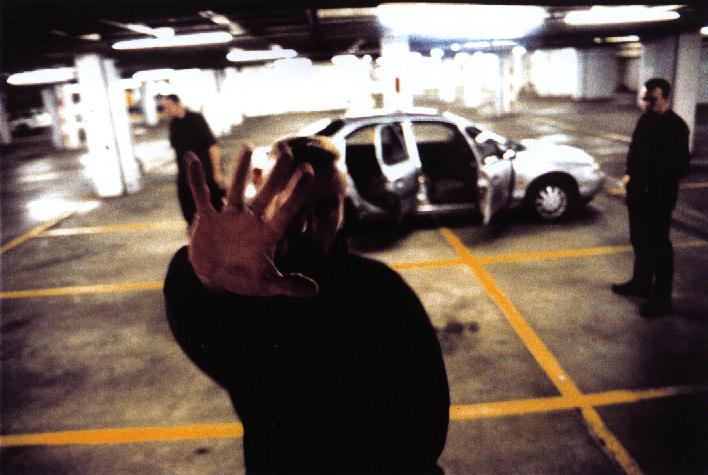 Could you first of all give us a little introduction on who you are, when you’ve started, which releases etc.?

I’m the rapper and producer from Glasgow crew Belles in Monica… There’s also DJ Dema who gives us the cuts. Red who gives us different guitar parts and effects. We had a few singles and an album out last year, now we got a new single droppin’ in the UK 15th Sep. Smoke Filled Rooms/That All U Got? I think the label’s workin’ on a European release quite soon, as well as the States. There’s a UK follow up in January Venom.. There’s like all the releases on the site http://belles.demon.co.uk on the merchandise page.

Could you describe your kind of Hip Hop music briefly?

I dunno man. What it isn’t, is BLING. I don’t see the point of that… Why use a fierce medium like hiphop to tell everyone how much money u got and the girls you’re bangin’.. You’d be as well joinin’ a golf club and braggin’ at the bar over brandy & cigars… The underground’s where u still got MC’s with heart and a conscience tryin’ to address real issues and u get the game more mixed up musically.. It’s just more interesting… We just do what we want, if people are feelin’ it, then that’s cool.

A lot of MC’s over here in the Netherlands are influenced by Hip Hop from the US, is that the same in your case? (if not, who else?, if so, who?)

I hooked into people’s attitudes how they used hiphop more than flow styles. So from the early days there were Ice T, PE, KRS-1 etc. It’s like, hiphop started in the States, so everyone since has been influenced in some way… It’s what u take from it and then do with it that counts. The reason hiphop so strong today is that it’s so diverse which means there’s no hard and fast rules. The UK artists are mainly underground got a lot of integrity doin’ things their way… I like the way guys like Life, Cappo, Jehst etc. go about their business. From the States, watch out for Crisis Center, 8.bliss, HalfwayHouse Emcees, Orphan Fam… Canada’s got some crazy stuff goin’ on… I could be here all day, but the point is they’re all diverse, but speakin’ from the heart.

Do you think that you will also be able to do your thing successfully across your own borders?

We’ve got stuff comin’ out in the UK fairly regular. There’s a single comin’ out in Australia right now thru 5Mic and Urbanelite, our promo team’s been firin’ out records to peeps all over Europe & the States, and the reaction’s been very healthy… Diversity of tastes reflects support and that’s the way it should be.

Did you already do international collaborations? If yes, with whom?

I’m right now working on the first one with about 14 different rappers from UK, Canada, France & States on an EP under the name Underground Cartel. We’re hoping this will come out early next year. I’ve already had a number of others from these territories and places like Puerto Rico, Croatia and Germany coming on wantin’ to do a follow up which is cool. So if there’s any Dutch emcees wanting to get on board, tell ‘em to get in touch! The worldwide underground’s beginning to come together, no doubt, and it’s somethin i’m really interested in developing.

Which is ‘the place to be’ for Hip Hop heads going on holiday in Scotland?

Traditionally, Edinburgh’s always had a good scene with clubs like Scratch, but Glasgow is been catchin up. Dema’s club on a Thursday night at the Art School is immense and voted 3rd in a HHC reader’s poll in 2002… But there’s so many now worth checkin’ out. Aberdeens got somethin happening as well on a smaller scale. If you come to Glasgow or Edinburgh, buy The List magazine as there’s a huge club and bar listing there.

What is the state of Hip Hop in Scotland? And which other acts do we certainly have to look out for?

Clubs are very healthy, and there’s a lot of good crews going around… Just as with anywhere else, it’s underground and a question of gettin’ exposure. Scottish mainstream radio is 95% chart based as is the press. But there’s the net station radiomagnetic.com, which is a good supporter. There’s always been a lot of good talent coming thru. Aberdeen’s DJ A La Fu is in London now, but doin’ big DJ supports and tours. Two Tone Committee are still goin’ strong and DJ Krash Slaughta has got a new group, Filibusterz. Worth checkin’ out: Ayrshire’s Homegrown Fam, from Glasgow there’s Eastborn and Damaged Goods, Edinburgh’s got Scotland Yard..there’s a lot more, they all got different styles which is healthy.

Where and when can we see you perform shortly?

It’s been difficult gettin’ it together due to our schedules… I’ve been in the studio with various projects, Dema’s got his club & radio show and also startin’ some solo productions, and Red’s been away on other things it’s hard to see that changing until next year.

Cool, a big up to the Dutch underground-do your own thing and keep grindin’.

Belles in Monica – That all u got? (snippet)