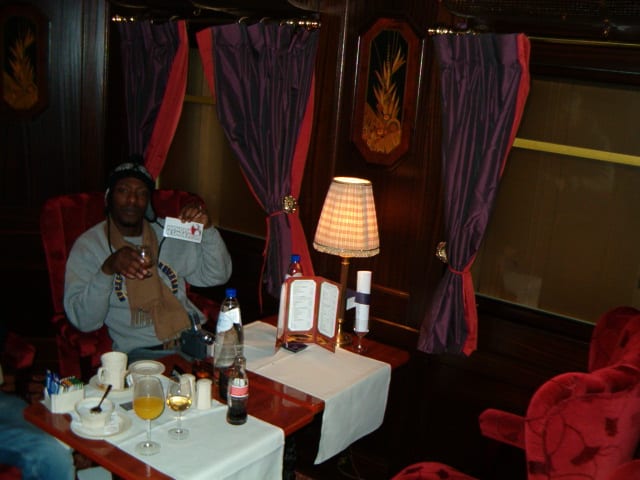 Hi Roots Manuva, We’d like to start off with asking what attracted you to make music and how long you’ve been at it?
Oow that’s a big old question right there..I started making music out of boredom, I wanted to do something. Initially that is. The first thing I ever did as a MC was a jingle for a DJ. He worked for a radio station called Corrupt Rock. Doing the jingle kind of led to making demos. Before that I was into making reggae. Growing up in Stockwell everybody was doing something with music, or breakdance or graffiti. After doing the jingle a friend of mine pushed me into taking music more serious. This friend was more into LL back then and I myself was more into Rakim so I tried to do more stuff that was Rakim style. Real cheesy, with an American accent. Sadly recorded beats actually. From there I’ve gone to the local community studio recorded a few demos and send them out to record labels. They weren’t interested.
I had also sent it to musical life; they were like the big record label putting out hiphop back then. They turned me down too haha. But I just kept recording and focused a bit on the production kind of things. From 15 to 18 I just had some records and was hoping to get some love for it but never expected all this. It was just something that kept me going, it kept me out of a lot of trouble too looking back at it. It gave me this dream of becoming famous someplace else in the world. I heard this tails of local rappers becoming world famous, it was all lies by the way, but it was something I was trying to do as well. At the time I never thought England would be hospitable to underground rap actually. The record labels were also more focused on dance and stuff.
The first thing I was really proud of was a group called Argue P in 1994 which was signed to a hardcode drum and bass label, we did one EP there. After that I featured on Black Twang in 1995 after that I had the first Roots Manuva 12 inch coming out. Then for promotion I did a lot of guest appearances I was the original rap whore haha. This went on until Big Dada came along and he said; “If you want to do an album, we’ll do an album.” That’s what kind of brought us here today. But I got turned down a lot before that happened…

Did you ever stop believing?
Loads of times! But the things that gave me inspiration were like early drum and bass, jungle and reggae sounds. I didn’t really quite connect with the linguistic aspects of it though.

Do you appreciate the lyrics more then the music?
To me the beat has its own lyric. Nearly everybody can rap today!

"My father was the deacon, he used to stand preaching." In Sinny Sin Sins you say your father is a deacon, how much did that affect the music you make and the way you make it?
My parents have a fascination with Christianity and they disliked my appreciation for music and reggae culture and the whole rasta ideology. It’s something I’ve really competed about; that music and that lifestyle.
Threw hearing how my dad could use his voice, the way he sounded the way he switched from being a country Jamaican to being an eloquent noble English person… He always consisted of me speaking proper language; he was quite a formal person. He always demanded that we addressed a person with his last name. If not I could be hit with a glass. Extremely conservative.

Are you a religious man?
No, I understand what draws people to Christianity but it has never been it for me. I could never accept that this bloke born 2000 years ago was the son of God. I mean you are the son of God no more than I am the son of God. If according to the bible God is everything then we are all the son of God.
It’s a lovely package, the knowledge that no matter what you do you can still be forgiven is very open to abuse. It’s such a nice package to control people. You pay some money and come here every Sunday en then you go to heaven. It’s all too convenient…

So you don’t believe in a God?
I believe that there’s something that is too magnificent for our simple lived that is too complex for us to even begin to comprehend. That’s why I’m always uneasy with some of the undertones of some of the Christian doctrines; speaking about with as if he is a man for example.

The first time I heard you MC-ing I always imagined you as a preacher and myself sitting in a church listening to this man talking about live and its encounters in such a great way. Do you share this view?
I love a good preacher’s stage presence and his intonation of words. A good preacher is an amazing show man. But I don’t see myself as preaching. There is a character in me that is taking the outline of a preacher but it’s not that I’m speaking gospel. Even if there is a little instance where I’m talking about people burning then it is just purely as a joke. It’s more my old chained Christian thoughts coming up. I used to really see those flames back in the days. The teacher was like “You need to pay attention! Otherwise you will burn in hell!” Then I used to really see those flames.

*So when you go on stage you become sort of a different character? *
I have to try to get that show man out on stage, get that preacher out! There’s a preacher in everyone you just have to get him out.

I’d like to quote two other things out of Sinny Sin Sins: *
*Why should I turn the other cheek and get beat?
Ain’t no peace without war so who am I?
Have you found answers to these questions?
Hehe. No I haven’t! I admire people like Martin Luther King that were so determined and peaceful at the same time in the face of people that wanted to attack him. He would never raise any kind of violent word or intonation to them. It was all about peace. Our society could do more with people like him. I just haven’t got that strength and I think that would be a beautiful place to get too. We’re all too often ready to fight!

You have new album coming out soon, what can we expect from it?
The new album is more experimentation. The new album is done more in the spirit of old like… late eighties where it was primarily one voice on an album. I tried to make it ten tracks but the record label was not having it. I wanted to be much shorter and snappier and every single track has to have it’s own distinctive sound. I wanted it to capture the origin of hiphop, when hiphop would take from everything around it. Country and western, pop, heavy metal just being a mix of all those movements and totally different of the sound of today. I wanted it to be unaffected by the sound of hiphop today. To draw a comparison to today’s hiphop; I think today’s hiphop is quite fast, it’s here and now, it’s like Mc Donalds. I’ll eat that, it’s quick and fast but what I was trying to do was more like a five course meal. Where you had to sit down and get to know it. You have to look on the menu and if you decide to step into my restaurant you have to soak up the vibe.

There are now 12 tracks on the album instead of 10. Did you change the concept or recorded some extra tracks?
No, I basically recorded way too much tracks. I just picked the most distinctive out.

Are the tracks all different moods?
That’s what I tried to do. Not necessarily a different lyrical mood but more a sonic characteristic.

Do you think that this album the best you could’ve delivered at this point or did the label push you in to adjustments for sale purposes?
I could have made an album that was easier on people. But that’s not how I came here today. I don’t think it’s a case of being good or less good. It’s just different approaches to making records. I could have made a record to try to unify the scene or something with three or four top producers and five guest producers but that’s not where my ear was. My ear was more on that Eric B and Rakim "" Follow the leader, KRS one "" Criminal Minded. Just one voice and an exploration.

In February or March you’re coming to the Netherlands to do a show. What will the show look like? Will you bring a band?
I don’t think we’re going to do the band thing here. I think it’s going to be two turntables and a drum machine. I will also create beats live on the show with the drum machine.

Could you give us a glimpse on your production setup?
At the moment it’s a MPC1000 with Logic Audio and I’ve got a Rhythmdoctor 202 a Boss drum machine and a S3000 excel.

Do you also play live instruments?
I can’t play. I can make a sound and put it in a sampler. I try to get good musicians to do that for me.