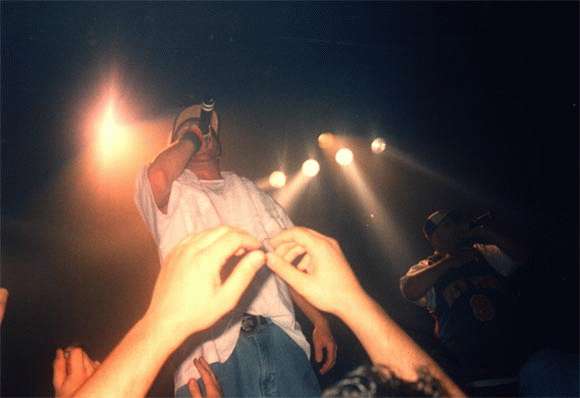 What’s the idea behind the metal version of ‘CIA is trying to kill me’?
Goretex: The idea was to create something that hasn’t done before. As fans of heavy music we wanted to sound so extreme as possible and I think in the future there may be some other stuff in that genre is coming out but that depends on our style at that moment.
Sabac Red: The track is a sense of paranoia also because the type of shit we say on record a lot of people don’t say, so it’s almost that we say the CIA is trying to kill me it can be? Literally? Or the powers who are trying to get down at us. For making just the kind of music that we made so we need to put it out to let them know we are aware, we understand and we are watching our field.

Can we expect remixes in an other genre for instance reggae?
Goretex:Propably not but you never know what happens. We listen to different kind of music together and individual we draw from different influences
Sabac Red: But no techno or dance though

Why didn’t the track ‘how to kill a cop’ apear on your debut album?
Goretex:Well it’s an older song and we are a kind of group when we record something we just put it out and we don’t just keep using the song. But Ill Bill is going to use it for his solo album

‘Say goodbye to yesterday’ did the track came forward of the events of 9-11?
Sabac Red: When I wrote that song it was way before 9-11 actually I recorded it as a solo song with Necro. After hearing it we agree to put it on the Non Phixion album so Goretex wrote a verse and put it on there. ‘Say goodbye to yesterday’ is just a model we live for we leave the past in the past and we deal with the future and the future is now, it’s in your face. Don’t forget yesterday but live for just now and it’s a chance for us to express ourselves in a way of people we lost that we know and things like that. That was before 9-11 when we recorded it but nobody heard it though.

In which way we can see Non Phixion as cultleaders?
Goretex:It’s just a metaphore, it’s an idea actually. Because a lot of people especially in America are just sheep they don’t think for themselves they aren’t free thinkers. So what happens, you have a population of people who can’t think for themselves. That comes down to music and comes down to why we want to sell millions of records and get our message across. As far as cultleaders I mean sure, why not what we got is a movement and I would say it’s a cult actually. I don’t know if we are leaders but we are not going to lead people because everybody got to lead themselves.

In which direction of hiphop are you heading? Will the tracks be more rugged or in the style of ‘say goodbye to yesterday’?
Goretex: ’Say goodbye to yesterday’ is just one emotion and on every Non Phixion album there will be a range of emotions there never will be “boom boom” heavy shit all the time. Maybe the next album is full electronics or whatever, everything is possible. It’s not our style to do just one specific style we never been like that, especialy lyrically

Headz in the Netherlands are giving you mad respect for the debut album of Non Phixion. How are the reactions in America?
Sabac Red:Dope! It’s love and we checked soundscan today and we were up like 22.000 copies and that’s without no video and no major airplay. That’s only for The States because we don’t get soundscan over here so it’s dope and we gotta lot of love from The States. I think we deserve it man I wish we sell a million records but we’re satisfied with these numbers now. In The Netherlands I know we get support for such a long time and I wish we would be able to get here in ‘96 when we dropped ’Legacy’ but unfortunally it didn’t work out and we are honoured to be here now.

How is the solo album of Ill Bill is coming along?
Goretex:I think he is half way you can expect Necro, El-P, Non Phixion etc. featuring on the new album. The producing is coming from Necro, Salamras, El-P and myself.

Which albums do you recommend to check?
Goretex:System of a down-Toxicity, there isn’t much hip hop at the moment that’s pulling me away except things from Def Jux. Other things Radiohead, Kylie Minogue and Shakira. Shakira is my favourite right now, no not her music just her ass!

So we can expect a collabo with Shakira?
Sabac Red:Hopefully oral collabo’s
Goretex: I wanna eat her ass do you agree?
Sabac Red: Yeah, I let her piss on me and lick her toes, there is coming a solo album from me and Shakira ha ha ha.

Most skitz in hip hop don’t tell anything, how realistic would you consider the skitz of Uncle Howie?
Sabac Red: Uncle Howie is the realest person in the world.
Goretex:Whatever you hear and see usually it’s true, he is a character. The skitz on the album is just him hanging around with us in the studio. He got a lot of stories and he is out there don’t get me wrong.
Sabac Red:Uncle Howie is like in his fourties he has been through it all. He take some drugs and tells us stories in the studio. We take some snips from the stories and put them on the album. Everybody can learn from him you can learn who you are and you can learn who you’re not and what you wanna be or what you don‘t wanna be.
Goretex:There is coming a spoken word album of uncle Howie on uncle Howie records with all his skits and some tracks.

Why did it took so long before the album came out?
Sabac Red:The record company didn’t know what the fuck to do with us they signed us on the music and they thought “we may have something here” and when they heard were we actualy talked about they didn’t know what to make of it. “Who are this white guys coming out bla bla bla” , “why are they talking of being political and revolutionary bla bla”. Motherfucker we are poor we’re from the projects in Brooklyn don’t tell me what I can or can’t talk about, do you want us talk about bubble gum and lolly pops? Fuck that we’re part of that struggle. The recordcompany became afraid so they kept us on the shuffle so we got our lawyers involved and we got out of those deals. So forget all the bullshit let’s do it independently: Uncle Howie Records, we allready developed a fanbase, we allready did some touring and just put it out. So we can say what we want and don’t limit ourselves. It was like they were jerking us off and they never let us bust a nut they gave us blue balls so we said fuck it and now we busted our nut: Uncle Howie Records.
Goretex: It had to be that way everything happens for a reason and none of the labels were able to keep up with our mentality.

So uncle Howie is about being independent and doing your own shit?
Goretex: Yeah, fuck creative control there is nobody that is telling us what we can or can’t do. When you have creativity like that, it’s endless, now we can do whatever we like.
Sabac Red: We are probably the greatest risktakers in hip hop also necro because we take risks man. A lot of people just sell out but we realy believe that there is an audience out there who is ready to hear our music. They just need to get exposed to it man So we will continue to do the music that we do and not limited ourselves.

What’s your vision on hip hop nowadays? And what would you like to change?
Sabac Red:Hiphop is the biggest music industry of the world. I appreciate and I love people‘s enthousiasm around hiphop but I also think there is a lot of bullshit coming out especially in the independent scene cause everybody with a home studio can make a demo, press it, put it in the store and sell it and a lot of that is bullshit. You still have to got quality in your music and have to come across and be dope you have to pay dues. I hope that the program directors or the powers that make decissions for the airplay will say let’s play a Non Phixion record or a Dead Prezz record etc. Along with Jay-Z and DMX because I like that shit too. There isn’t a lot of balance and that’s not fair for the people because they don’t have a fair choice to choose between different kind of hip hop. That’s the thing that I would like to change in the scene right now!