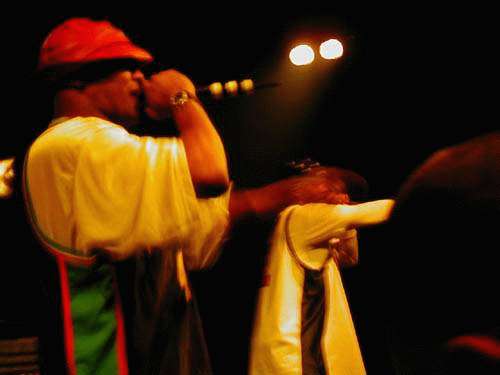 Are you planning to do a collabo with the rapper Esham in the future?
I worked with Esham, I did a pretty good collabo with him before. But I try to keep it exclusive. I love working with Esham, but I think this time around, I may change around. I have a lot of surprising artists that I love to work with for the next semester.

Like who?
I love to try something brandnew for myself, like something that I’ve never done. Like work with anybody of a caliber that is different. Even if it was with Cash Money or with a rock group or a r&b group. I just feel I have no boundaries as far as what I’m doing.

You are kind of a musical chameleon, would you be interested in doing a collabo with David Bowie?
I’m very interested in an unorthodox collaboration. I think it would be very interesting ‘cause I think I don’t have any boundaries or limitations. Even if I work with commercial artists or with underground artists.

According to rumours you’re planning to bring out ten more albums in the future?
I have a lot of albums in focus. I want to figure out what label I want to distrubute these records through. What records I not wanna waste and what records are actually for the underground and with what records I wanna do bigger things.

Is it true that the Ultra Magnetics will have a reunion soon?
We’ve been talking and are trying to get the group together mentally first to see if we can record an album. It’s a hard thing that can be complex. We did four songs but the point is to keep them together and agreeing upon an album. It’s four grown men with different ideas and egos. So I’m willing to do something with them but it’s the point of getting the group mentally together.

Can we expect Dr Octagon 2?
Dr Octagon 2 is definitely in effect, I’m working on it. I did it with a label, really different. They were expecting Dr Octagon 2 to be like Dr Octagon 1 – which is irrelevant I think. You can’t repeat the first album. Let the first album be what it was and do the second album a different way. I think people are living in the past. That’s been a big thing of mine. The past is that people are still trying to repeat records I’ve already done. We should just move on basically.

Have you got a new name for us?
For this new project coming out? Ive got something called K-Mac, an album I’m working on. I’ve got lots of things up my sleeve.

What’s the deal with Kool Keith.com?
My regular website was tore down by Columbia and some Sony affiliations, so I don’t got that website no more. That was a very good contribution from the guy [cynische opmerking, red.]. I let it be if that is what I have to work with.

What about Sony and the Black Elvis album?
I think Sony was not ready for the Black Elvis album which was a great album. When I came out a lot of people followed the Black Elvis steps and took advantage of it. Black Elvis was the beginning of wearing the wigs and the masks. We had Outkast, we had many groups. We have had a lot of people taking advantage of that, a lot of groups and companies that took advantage of what Sony didn’t take advantage of.
I mean a lot of groups went on and utilized from Moby to everybody, different characters that took it and ran with it. I had a great marketing plan for Sony. They didn’t agree, so I had some unproffesional people around me that couldn’t utilize that album the way it should have been utilized. They just messed up a good image and a good album and now people would like me to do it again. But I’m finished with that.

What do you think of record companies not really recognizing that hiphop artists are setting a lot of trends in the world?
Record Companies are corporate right now, they are trying to make the money. They can use the gangster stuff, they can use anything to make money. They just want to make the money they can and don’t really have time to work projects up from the ground. There is no such thing as underground rap anymore, it doesn’t exist.

How come some stuff you bring out is hard to find like Cenobites and Big Willie Smith?
I think I had a lot of a bootlegging going on from Newgroup Carolina, that was my distribution. A lot of albums were bootlegged, copies of people capturing my music through DATs and different things. I have had a lot of misrepresentation. But a lot of labels had my stuff, I don’t know how Matthew and Dr Doom circulated. I don’t know if the records got out here or not, but there was a lot of bootlegging going on, a lot of jacking and stealing music.

Will you still be working with Kut Master Kurt in the future because he is doing his own thing at the moment?
I gave Kurt his beginning, Kurt is a good person. You know Kurt got into hiphop because of me. The same with Automater, nobody knew who he was. When I went up to Automaters house and we started Dr Octagon. I played a lot of the keyboards on Blue Flowers.