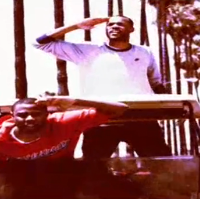 Over LA is MY Playground

“LA is MY Playground” is a short film about the subculture of burgeoning LA Hip-Hop acts starring Nipsey Hu$$le, DOM Kennedy & Pac Div (with a special guest appearance by David Banner). The film captures a once in a lifetime experience of these artists on their rise to stardom. Each artist has a song in the film that directly relates to LA; Showtime-DOM Kennedy, The Mayor-Pac Div, Hometown-Nipsey Hu$$le, demonstrating different places in their career.

As a soon to be graduate of LMU’s film school, Jason took a break to complete this film. As a Music Producer (DOM Kennedy’s “25th Hour,” “Showtime”), Rapper (featured on DOM Kennedy’s “Watermelon Sundae”, debut album Stick to the Script is coming coon) and a Director, he felt that it was his duty to present a window for all into the lives and music of these artists on a different platform.

“Mayor” is PAC DIVs first hit, that sparked them a deal with Universal Motown and the video shot by myself and Coodie&Chike (of Creative Control) was a journey through the streets of South Central and Downtown Los Angeles. We go behind the scenes of the video and their everyday lives to get a feel of how the group operates, what sparked the song and what’s up next.

Nipsey’s story is one of a rapper on the come up. He is in complete grind mode in the studio recording his own verses while taking coffee and pizza breaks in-between. His “gangsta” comrades stop in to join him but that doesn’t knock him off his hustle for 1 minute.

DOM’s portion is the direct video for the never released “Showtime” single, due to technical reasons. The video was shot in front of the Staples Center during Game 1 of the Finals of our World Champion Lakers, as well as a cameo of the infamous LA In-n-Out burger.

This is something unlike anything you’ve seen before and a style that is sure to be often copied in the future. Some of the best movies are the ones you have to watch over and over to get the meaning. This is 1 of those films. Equal parts engaging, funny, and just cool. “LA is My Playground” is a groundbreaking short film, set to be premiering in a number of Festivals across the country within the next year.