WALL ART AND THE POLITICS OF SPACE: A CASE STUDY OF DELHI 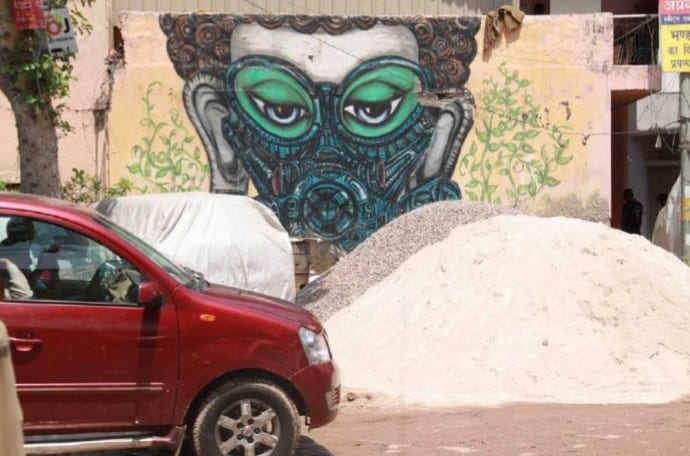 Urban Sociology illuminates a unique field of study of the city and its social life where both time and space run as intersecting axes. The idea of urbanism interlaid with these temporal as well as spatial vectors, allows for a multi-textual landscape to emerge. Thus, while looking at urban landscapes such as Delhi, that are colloidal in socio-cultural, economic, geographical as well as physiological sense, space becomes an inherently complex force field. In The Practice of Everyday Life, Michel De Certeau argues, “Space is a practiced place”. While place is a kind of locus that functions for “ordering elements in a relationship of coexistence, space occurs as the effect produced by the operations that orient it, situate it, temporalize it, and make it function in a polyvalent unity of conflictual programs or contractual proximities” (Certeau 1984). Spaces are stories told by the dynamic intersection of mobile elements, and as being a ‘practiced place’ spaces are constitutive of symbolic meaning. They are neither neutral or passive nor equally designed but play an active role in creating a particular social order.

Spaces have been known to embody experience that resonates with French scholar Henri Lefebvre’s conceptualization of space “as not a thing but a set of relations between things” (Lefebvre 1974). While many thinkers such as Edward Soja have been studying what they call “spatiality of social life”, scholarship on city as an object of study has made clear that people not only shape city spaces over time, they are shaped by those spatial arrangements as well (Soja 1985). The practice of street art provides a fertile ground for leading an examination of public spaces within the city. Moreover, there exists a dynamic, dialectical relationship between spaces and art, which shape and affect each other in multiple ways. Street art in general and wall art in particular, through its various forms, asserts the argument that a space is never finished since spaces embody a living element because they are constantly being made and remade.