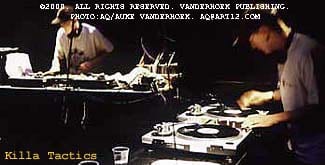 Although Bonez was told to get on stage by several people so peeps could see who the new competitor was, Bonez did not show himself. The audience decided that Drastic Measures were the one to challenge. It became a very close call. Which Killa Tactics won.

Winner: Killa Tactics from Belgium. Competitors: Nonna, Phreaksteez, De Dweilers, Drastic Measures. Double Deuce and Tri-Agle were a no show. Later the word arrived that Tri-Angel were involved in a serious car accident. Lucky they were not harmed. The 2nd edition was hosted perfectly by DJ Precise (FreshMode/AMMO Lab) and Shockwave (Zombi Squad).

The promotion of the second edition could not be maximized because of the loss of thousand flyers which were discovered on the evening it self. But, still the venue was packed with almost the maximum amount of people the venue may hold (ten people less). The fire department forbids the Frascati Theatre will be packed as a concert venue. Depending on the success of the second edition it was decided if the school would continue or Nes Productions would back out. Eline: “If it would have stopped at Frascati we, AQ and me, would continue it on some street corner or yard.” Eline showed her faith in the concept.

First up was Double Deuce from Zoetermeer. But they never showed up. From Zwolle came Phreaksteaz. Dropping a mad show, two MC’s with a DJ. The humour was brought in with ‘De Dweilers’ from The Hague. The first song only contained one lyric and it still was swinging. De Dweilers consist of three MC’s: a father, son and a friend. They also work on theatre plays.

The Docks were represented with a big crew: one DJ and six MC’s. Drastic Measures. After some problem with a suddenly broken down mic, host Shockwave handed over his mic. Normally the mics of the host will be kept separate to avoid differences in sound quality of the performing acts. They delivered a very tight show. Nonna was the only female of the evening. She performed her thing in English and French. And rapped about a girlfriend that was killed in a car accident. Killa Tactics, two DJ’s, stood up on the spot like Nonna. All other announced themselves in advance at ART12 and Just 4 Fun.

Killa Tactics specialist in Turntablism, dropped the best show according to the audience. In the final call every competitor, except Nonna, stood up to challenge the audience choice. Including a new kid on the block, Bonez. The audience had to decide who was allowed to challenge it’s first choice Killa Tactics. Although Bonez was told to get on stage by several people so peeps could see who the new competitor was, Bonez did not show himself. The audience decided that Drastic Measures were the one to challenge. It became a very close call. Which Killa Tactics won.