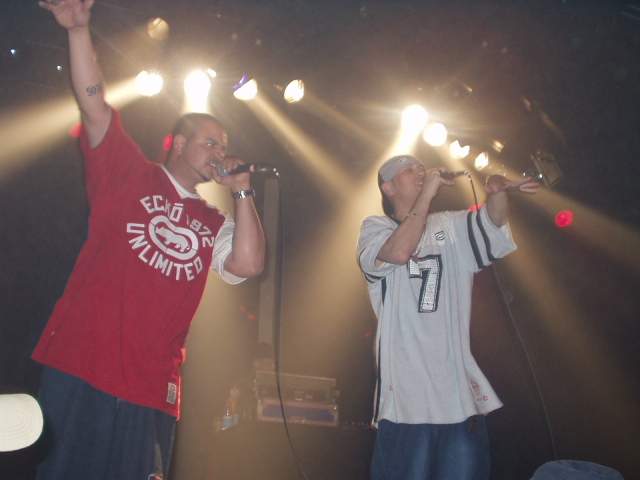 For me personally, it would be seeing the pioneers of underground hiphop for the fourth time. Having experienced a show in their hometown Brooklyn, I pretty much knew what to expect from the group that now exists for 10 years.

Arriving in the Melkweg unfashionably on time, I was not really surprised with the low turnout. After all, all the reasons mentioned above would even make the most die hard fan stay home or go see Masta Ace in Harlem the same day. But as time passed on, I once again saw the great potential the Dutch hiphop scene has as once again the Melkweg was filling up.

While drinking the crappy beer of Melkweg, it was time to check out the opening act. I will speak honestly now, I hate opening acts. I think they are a waste of time and are usually wack. For the second time this evening, I was wrong. Frontline, consisting of the MC’s Rawskillz and Jay Frenzy and DJ Krylon had a tight show consisting of strong concert beats and tight rhymes. The way the two MC’s finished off and worked with each other was also very impressive. Make sure you check these guys out in the upcoming HIJS parties.

30 minutes passed, a fool puked while drinking the dirty beer (a very friendly lady took the initiative to clean it up), and finally it was time to get rowdy. When Eclipse started playing Toxicity by System of a Down, I knew that the shit was starting. Being quite a relaxed person, I thought that I was safe while standing in the middle and not entirely up front. This is when I knew that I was wrong for the third time in the evening. People started jumping around like crazy, moshing, and pushing each other around. In a timespan of 15 seconds, 3 people stepped on my feet and I was pushed around heavily. I was getting the fuck out of here…

A couple of songs were finished, and there was still no sign of my favorite Non Phixion member, Goretex. Apparently he is in New York finishing up his solo album. This is the point where I was disappointed, not because Goretex wasn’t there but the way Non Phixion treated the situation. The fans have a right to be angry because: 1. Nowhere was it stated that he would not come and 2. Q-Unique and Sabac dared to say things like “Look guys, WE came here all the way from New York just to party with YOU” as if they were giving a free concert just for the fun of it and also comments like “Would you rather NOT have a Goretex solo album” just smelled like bad arrogance. Oh well, when you have titles like “Black Helicopters” and “I Shot Reagan” under your name, you have a right to be uptight.

Playing the classic Non Phixion tracks, the crew once again ripped the Melkweg in half. No matter how many times I’ve heard or seen them live, these men are dope. Very dope. Even with the absence of Goretex, the rappers did a very well job. The set consisted of a lot of solo tracks since Sabac and Ill Bill released new LP’s entitled “Sabacolypse” and “What’s Wrong With Bill”. Q-Unique also spit a lot of new material from his upcoming album produced by Necro. All of these projects show a lot of potential.

The beats were amazing as always, the rhymes were tight (except for Ill Bill) and the only negative thing about the show would be the “Telsell” messages Non Phixion would bring to its fans. Almost after every 2 songs, a little break would be given to promote new shit. I found myself waking up this morning and the first thing I remembered was the “What’s Wrong With Bill” came out a month ago and is available in the merch table after the show.

There is news that Non Phixion will be back again before the end of the year, so if you have missed them for the previous 3 times, check it out!