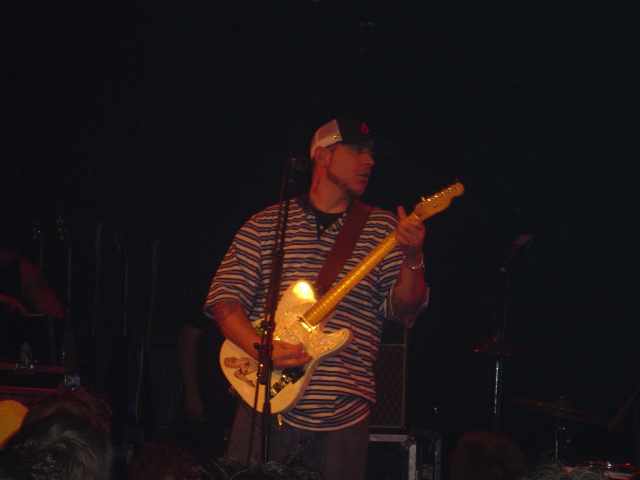 The Effenaar is soon to become a cinema complex! At least that is what it looked like in the construction poster in front of the legendary concert hall who had been blessed by MC’s such as Cage and Kool Keith. The new project looked very futuristic/complex and hopefully we will see more hiphop in the Eindhoven ArenA.

Entering the venue, I was surprised with the amount of hiphop heads in the crowd. There were about three of them… Besides that, the Effenaar was filled with rock/alternative type people obviously there for the guitars.

If you have read any of my previous work, you know that I’m not a very big fan of opening acts. Well, today just made it ten times worse. When the duo “Steam Supreme” hit the stage, I was expecting some r&b type stuff because one of the guys was wearing a tight shirt while the other one looked like a fashion model. They said they were down with hiphop and spat rhymes while the bald MC was doing Justin Timberlake type dance moves. Although they had 1 dope track (which was done in Dutch), they definitely did not manage to please the rock crowd.

While waiting for Everlast to hit the stage, the house DJ started spinning more tunes. Going through some indie rock tracks, he suddenly switched to Atmosphere. I didn’t know what he/she looked like but I just wanted to give the DJ a big kiss.

After another 20 minutes of waiting, a couple of people hit the stage to check on the instruments. Checking each guitar one by one, the crowd was starting to get very bored. Wasn’t the sound check usually done before the crowd enters?

Finally it was time, and the heavy man with Irish roots hit the stage. The first five seconds of the show just blew me away. I had been to rock shows before but not in a small environment like this one. The energy and power of the live music really made me realize that it’s a shame more MC’s don’t have a live band. It really sounds so much better than a cd player or turntable (obviously). Everlast performed a lot of his songs from the album “Eat at Whitey’s”. Dope tracks such as “Black Coffee”, “Graves to Dig”, and “Black Jesus” were amongst the setlist. Also new tracks from the album “White Trash Beautiful” were performed in order to promote it to the crowd. As you can see from these tracks, this show was not really hiphop based which made me wonder why a DJ with turntables was present. I barely heard the man scratch, and almost all the music was played live, so what was the man doing there?

As the set continued, all the tracks started sounding the same, and this made it boring to be honest. Loud guitars, Everlast’s sometimes monotonous vocals, and a keyboard player… Just when I almost fell asleep, I was woken up with a cold shower. Was this real? Was the legendary Everlast making a cover of “99 Problems” with his live band? Nooo… Yeeess… Its true, he did it. No further comment…

The concert was reaching its end, and the moment all 4 hiphop heads in the crowd were waiting for began. The DJ became useful for the first time in the evening and started spinning the instrumental to “Jump Around”. Unfortunately, the drummer forgot to start bangin the bassdrum so the loop went on for a little while until he remembered to kick it. Everlast performed almost less than half of the track, and I almost wanted to cry. The man gave one of the most famous hiphop tracks of all time 40 seconds…… As Des’ree would say: “Life, ooohh life, oooo liiiife.”

As many musicians do, Everlast finished his set off in style with the track “Put Your Lights On”. The crowd (very unnecessarily) lit their lighters and moved their arms gently to the guitars. It was an alright evening but it could definitely be considered more of a rock night than anything close to a dope hiphop show.