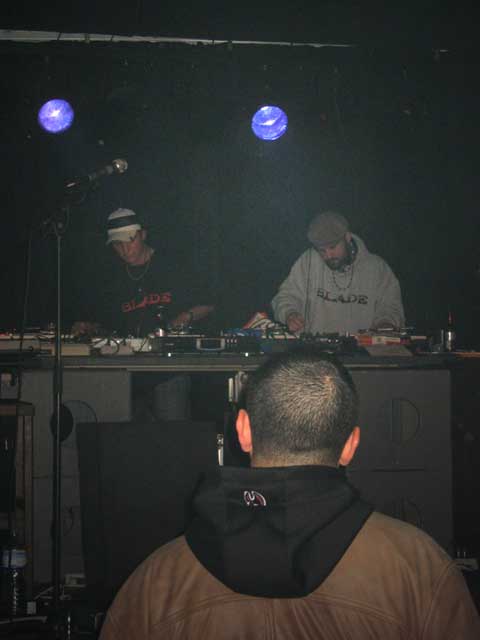 So there I was in Amsterdam Central. Time = 15:00. Destination = Arnhem. Performers = The Anticon gang including Passage, Restiform Bodies, and Telephone Jim Jesus.

I was full of hope and had only one fear. If the NS would behave, I would make both shows without missing anything. If it didn’t, I was in deep trouble. What I did not know was that this was going to turn out to be one of the longest days of my life.

So stepping off in the Arnhem train station, I was picked up by HIJS “Employee of the Month” Rauf and the always adorable Ruys. Heading over to the Goudvishal, there was a lot of construction around the venue. It was also difficult to tell where the entrance was since a doorbell had to be rung in order to enter the place. It felt like I was visiting a secret party or something.

Entering the small venue, I saw that the Anticon heads had set up their merch table and were selling goodies to the Dutch crowd. On stage were the Waxflowers happily spinning away their records which included an impressive mix of Company Flow, Kool Keith, and Sage Francis amongst others.

The opening act for Anticon was a Dutch dude who had a nice flow in English without an accent. He talked about everyday subjects and reminded me of MacLethal a bit. Damn, that’s like the third time people have reminded me of Mac. Why!?

The first to hit the stage amongst the headliners was Telephone Jim Jesus. His instrumental set started off with a deep trancelike mood that had the heads nodding. The opening track was entitled “Failure to Fly” and would soon be released on his upcoming album on Anticon records. Although his set started off well, it started dragging a bit onto the boring side. That is because it turned out too much into a composition of weird space like sounds that you could only enjoy if you are on pcp or something like that.

I really congratulate the organization for pulling dope acts for this day but I also have some criticism (an article by Bora without criticism is like going to Egypt and not seeing the pyramids). That is the fact that too much time was being spent on djs spinning records. Especially for the issue when Telephone Jim Jesus was asked to end his set early by the organizer. I expected the Restiform Bodies to hit the stage right away but this was not the case and the djs span more records. That’s not cool. Especially if you have another show to catch and are in a mad hurry.

The Restiform Bodies were very dope. This surprised me a bit to be honest. The vocals were crisp (even though not fully understandable at times) and the inclusion of the live musicians made it quite enjoyable. Its always dope to see a mix of live music and rap, it gives a much better feel both for the artists and the crowd.

The last mc to hit the stage was Passage. I caught around half of this man’s set since I needed to rush to Amsterdam in order to catch the Treacherous Four. If the organization had eased up with the djs spinning so much, I would not have encountered this problem. But then again, when you go to a show you expect to stay there till the end, so you cant really blame them. BUT, then it would have been wiser to promote this as a one day festival or something since so many acts hit the stage. Oh well, maybe next time.

From what I saw, Passage had really deep tracks. Especially the one where it started out laid back (in a sort of Radiohead style) but went on to have Passage rapping over the beats quickly and on beat. That was dope. The set then went on with more instrumental works which were quite unique.

Getting my ass out of there, I was once again on the train ready for a new adventure. Things were going ok, but as we all know, all good things must eventually come to an end. The drama with NS never seems to stop. Just when I was happily on my way to Amsterdam, the train broke down. I was extremely pissed but there was nothing I could do. I was just hoping that Mike Ladd would be the first to hit the stage of the Treacherous Four since he was the artist I knew least about.

Entering the Melkweg, I thought that I was extremely late. Seeing only around 40 people in the crowd surprised the hell out of me. When looking on stage I could see Rob Sonic with mc Creature spitting rhymes. I was a bit disappointed but was glad that I had not missed Busdriver, the mc which I was looking forward to most.

Rob Sonic was performing tracks from his latest album “Telicatessen” which came out on Definitive Jux records. Tracks such as “Sniper Picnic” and “Super Balls” were performed with relative enthusiasm where the vocals were not understood clearly all of the time. Finishing off his set, Rob Sonic asked the small amount of people to give it up for Busdriver who had already taken the stage. What? Busdriver was done? Noooo! Damn the NS and damn the Dutch railways. I had missed the legendary mc from California because of a train breakdown. I was about to cry.

But have no fear HIJS readers! In the next paragraph our good old boss Yid will give a short description of the Busdriver performance that was carried out in the Ekko, Utrecht:

Busdriver had the undesirable task of opening up the evening in the almost empty Ekko. He seemed not to have a problem with this and went on to give a strong performance for around 20-25 people. His quick rapping joined with his fast body movements made it quite enjoyable to watch. The other acts of the evening had backup mc’s or a dj but “The Bus” was just there by himself and not giving any breaks inbetween his tracks. He gave the performance his full heart and the people seemed to respect/acknowledge it well. Everybody was ofcourse waiting for the track “Imaginary Places” which is used in the videogame “Tony Hawk Underground”. He performed it quite well, and thats surprising for the ultra fast track. Finishing off the song, it also meant that it was the end of his set. Quite unfortunate, because this man definately killed it.

Alright boss, thanks for the info.. Now back to crazy sunday:

In this paragraph I want to give a BIG UP for Nathalie who works at PIAS records. She genuinely tried her best to arrange the Busdriver interview but something always came across the way. Whattup Nat, when is that phone interview you promised coming?

The opening act for Anticon was a Dutch mc named Indepth who had a nice flow in English without an accent. He talked about everyday subjects and had alright beats. His backup mc was called Phat Poodle but was far from being cute.

Next to hit the stage was Beans. I really appreciate this man because of his abstract style and creations away from the norm. Starting his set off with a dope acapella, Beans continued on to give one hell of a performance even though you could count by hand the number of people watching the show. Knowing him from the Anti Pop Consortium, Beans went on with his set which was full of rhymes and beats that were stange/bouncy/funky. Very dope and weird at the same time, make sure you check out his album “Shock City Maverick”.

The final act of the evening was Mike Ladd. Honestly, I did not know much about this man or what he was capable of doing. Expecting some sort of hiphop, I was very surprised when I saw a live drummer bangin beats while Mike was choosing the songs on his laptop. This man was not rapping but rather singing with a “kick your ass” style attitude which was dope to see. Even though the crowd was near to nothing, he was giving it his all (just like Beans and Rob). Busdriver even joined him on stage later on and I got to witness one track of the great MC. Finishing off his set with his latest work from the album “Vernacular Homocide” (yes homocide, not homicide), it was an end to a good performance.

One definite suggestion I would make to the Treacherous Four is for them to change the lineup of the show. It would be much better for Mike Ladd to start off and give the crowd a surprise, followed by some straight up rapping from Rob Sonic. Then, Busdriver should hit the stage to be finished off by Beans at the end. Its really strange to see the lineup being placed the way it was.

It was a long and hard day full of traveling stress for a young HIJS worker. Nevertheless, it was quite enjoyable. I just wish that I didn’t have to miss half of Passage and the whole of Busdriver. That made it really wack but what can I say, c’est la vie… Ce la who? Ce la V!