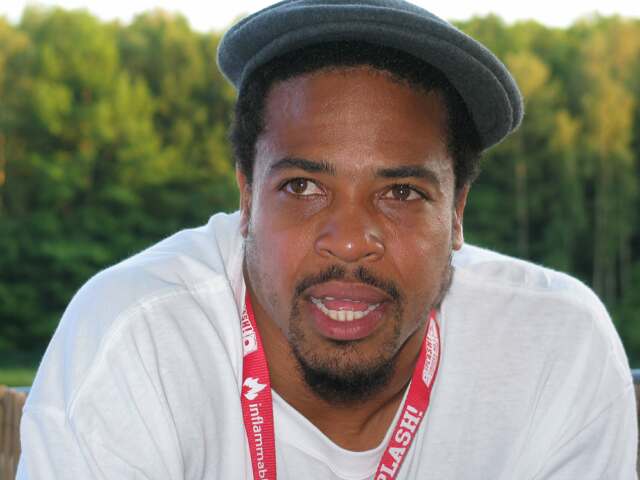 After the performance of Zion I we spoke with MC Zion and his Backup MC Deuce Klips about the show. Pronouncing “Hiphopinjesmoel” in Dutch to the mc’s, the interview took off..

Hi guys, can you introduce yourself to the Dutch audience?

Zion, I noticed that you were performing without shoes? You do that more often?

Zion: Yeah I do that all the time! It’s about comfort, it’s my life this so I think I might do it as quit comfortable as possible u know. Wherever on stage…

Was this the only show in Europe you guys are doing this year?

Zion: We might come back for a show in December, maybe..

Zion: In Germany, or probably France.

Any plans to come to the Netherlands?

Zion: I hope so! Never been there!

Alright, what was the main reason to release “The Collection” Album cause most of the tracks were also on the “Deep Water Slang” album?

Zion: yeah, I mean, that was the record company man. We wanted to come with “Deep Water Slang version 3” That’s what we wanted to call it so people would know it was like the same record as the version before only now an updated version. These business guys didn’t listen and it took to long to release it out here. The idea was that cats out here to know about our music, but I don’t know it went out well.

So do you have plans to search for another label?

Zion: yeah definitely.
Deuce: They were good in what they did, but a lot of little things came together. What we are really focusing on is to do the distribution by ourselves.

The album “Mind over Matter” was a really strong debut. But it didn’t get the publicity it deserved.. How come?

Zion: One reason was the record label at that time (Ground Control) went over too many projects at one time. So basically they got an amount of money and six groups they were trying to promote within a year and later came to the conclusion they hadn’t much money left. And that was the kind of position we found ourselves in there.

It’s a shame cause it was really a strong debut and critically praised in some well known magazines.

Zion: Yeah, u know, that’s how it is. But you must take the negative power and turn it into positivity and that’s what we’re doing.

You guys are really energetic on stage. How do you do it?

Zion: Man we’re both really tired now. But it’s the music. Being here, performing here and around the world with our music, we make, we love hiphop, that is a blessing man. So every time I get on stage I got to represent it cause I know it’s a blessing. I hate it when MC’s get on stage and walk around and don’t do something special. We trying to give the audience some action, something more.

Deuce, have you been traveling more often with Zion I?

Deuce: Basically I’m a solo artists from the bay area too but I’ve known them for a long long time, and we were always friends. And now for some couple of years it we have been able to perform more together. It’s a Zion I show and mostly they get us like me and some other MC’s do our own thing on stage. And so on we trying to make a strong foundation to make good music.

What can we expect in the future from Zion I?

Zion: We got a new mixtape what’s about to drop in probably September, it’s called “Family Business”. And we got a new album dropping in March next year 2005. We try to finish the album on time and then we focus on our next project.

Any collaborations we can expect on the album?

Zion: Let me see, on the mixtape we got; Vast Aire, C-Rayz Walz, Pep Love, A Plus, Dust, Lyrics Born and I think that’s it for the mixtape. And then the album we’re not done yet so…

What does Zion stand for from your perspective?

Zion: It’s more from a Rastafarian perspective. Cause many people on the world look at Zion different. For me God is within all of us. Basically that is also the meaning of Zion. So that’s how we came up with a name. Along with that is that the music hopefully inspires and motivate the people who hear. So mainly positivity is the big idea.

Thank you very much for this conversation, any shout outs?

Zion: yeah man sure, go check out; www.zionicrew.com, big up to Deuce, Livin Legends, Hieroglypics, everybody.
Deuce: Big up to my man A Small Bay Area. From San Francisco to Pittsburg, u know how we do it. Chil