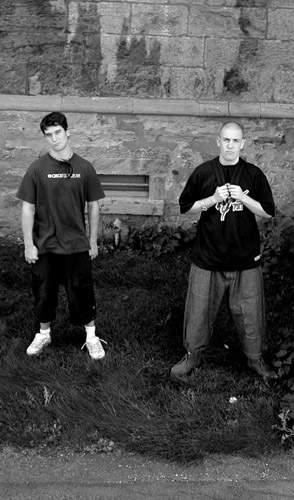 Could you first of all give us a little introduction on who you are, since when, which releases etc.
Rugged Intellect: Blitzkreague is basically composed of two independent entities, Rugged Intellect and Prophecy. Blitzkreague is the name of the conglomeration when we record tracks. We dropped an EP that was sold at shows and on the streets last December. Personally, I’ve been rapping for about 4 years, writing poetry for about 7 years. Right now, the release that we are pushing is the Nine Majesty mixtape, which is basically a compilation of 17 tracks showcasing all the members of our crew, the Nine Majesty. These members are Euphrates (who also just dropped an album, http://www.euphrates.ca), Loe Pesci, Apokalyptik, Shades of Culture, DP Mastery and Oddeo. Many projects are in the works as we are all continuously working hard at our craft every day, whether by doing shows, recording tracks or just plain politicking with cats to get the message heard as far as possible.

Could you describe your kind of Hip Hop music briefly?
Rugged Intellect: The music we put out is reflective of society as we see it, and every single element that it encompasses. Self-glorification does not apply.

A lot of MC’s over here in the Netherlands are influenced by Hip Hop from the US, is that the same in your case? (if no, who else?, if yes, who?)
Rugged Intellect: Well, it’s evidently obvious that any one who chooses to pick up a microphone and start to rap is influenced by the United States, being that hip-hop originated in the Bronx. On another aspect, the culture of hip-hop is so versatile that its essence is not limited to any geographic boundaries as it can be heard by anyone. Personally, I’ve always had a preference for emcees that utilized words as a painter does a brush and just paint images, equally perfect in rhythm and flow. The first cats to really usher in that conscious rawness for me was without a doubt the Wu. Later on, I was really enlightened by the music of cats like Ras Kass, among others.

Do you think that you will also be able to do your thing successfully across your own borders?
Rugged Intellect: Without sounding conceited, I believe that with the required budget and distribution aspects vital to independent entities such as myself, it is definitely plausible to say that our music can be felt by cats all over the world. We’ve had this page up on the web with some tracks for cats to peep and the responses have been dope. We also do lots of shows all over the place and get love no matter what area code we are in.

Did you already do international collaborations? If yes, with whom?
Rugged Intellect: Considering I live in the cultural melting pot known as Canada, I consider all of my collaborations as somewhat international, because the majority of the artists I am affiliated with are not of Canadian descent. One of them is Narcycist, part of Euphrates, a group that also includes producers Nofy Fannan and Habillis. They are from Iraqi descent and definitely represent that part of the globe. Aside from that, we haven’t collabed with any overseas cats or any american cats, mostly because I believe it is vital for one to build his own foundation rather than seek leverage through collaborating with well-known industry figures. For now, I only work with my internal fam but I’d like to collab with some of the older statesmen in hip-hop that laid down the groundwork for cats like us to do our thing.

Which is ‘the place to be’ for Hip Hop heads going on holiday in Canada?
Rugged Intellect: That would definitely have to be Montreal during the Under Pressure International Graffiti convention that is thrown every year around the second week of August. During the day, the festivities include over 30s spinning non-stop while loads of breakdancers are battling it out on the concrete. Meanwhile, the graf artists are painting their masterpieces all over the walls allotted each year. At night, the festivities end with a bangin’ ass show featuring some of Canada’s best acts. This year’s show was bonkers!

What is the state of Hip Hop in Canada? And which other acts do we certainly have to look out for?
Rugged Intellect: The state of hip-hop in Canada is still being developped by the day. Of course, you have some jiggy cats making some moves and whatnot but nothing major is really going down in Canada. It would be unfair to say that talent cannot be found here as Canada’s underground scene is a burgeoning one filled with hungry cats that are just waiting to get that shot. Right now, the world needs to check out Euphrates, who just dropped their album, A Bend In The River. That album is hip-hop like you never heard before, and cats need to check it out ( http://www.euphrates.ca ).

Where and when can we see you perform shortly?
Rugged Intellect: Unless I get booked for a show there in the near future, you won’t see me in Europe for a while although it is something I would definitely be interested in doing. We got a couple of shows coming up here in Montreal, as well as a couple in Ottawa and Toronto as well. Europe, get at me!!