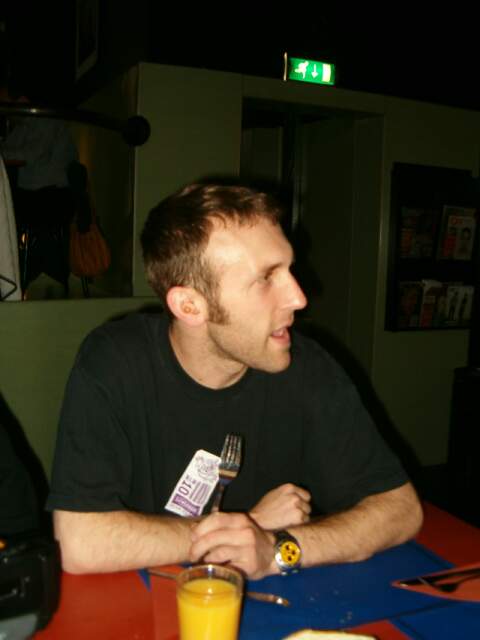 So RJ, how is Since We Last Spoke received in the press worldwide? In the Dutch press, the reviews have been very mixed, from enthusiastic to very bad.
I think it’s across the board. I think it’s the best received in England. There might have been, but I don’t have seen any English reviews that were bad. There were a couple of American reviews that I’ve read wich had 1 or 2 stars…

I understand you play the drums, as we could hear on one of the Deadringer tracks. Do you play any other instruments on Since We Last Spoke?
I actually did not play the drums on Deadringer. What happened is I got an eviction note from my landlord, they wrote me a letter with you gonna stop playing drums or you get an eviction. And it was at the time I was mixing down Deadringer, all the drums are sampled I did on there. But it was the highest compliment they I arguably ever get, that someone in my apartment building was thinking “O, he’s playing drums again!” They thought it was real fucking drums! And it was all sampled of a record so that was the ultimate compliment…
Anyway, the new record does have drums. But I play keyboards, guitars and do singing!

Yeah, I understood you sang on some records with your girlfriend…?
Yeah unfortunately.

You’re not happy with the result?
No no, I’m cool with that. It is what it is… I don’t think it is my strong suit. I probably sing better than most of the DJ’s. I’m no Tom Yorke and I know that. I battle him on the turntables though! (laughs)

As a Hiphop-fan, who would be your alltime favorite producer?
Yeah, I shall go for Marley Marl.

Was it your actual intention with Since We Last Spoke to do something completely different from Deadringer. Or wasn’t it a conscious decision?
I didn’t try to do something completely different. To point out, some songs were kind of experiments, if they were on Deadringer, they’d fall off ‘cause I thought people didn’t want to hear that kind of shit… I was just trying to do new shit. I’m always trying to do new shit! For any kind of project. My goal as a producer for every single record ever do to not sound a like. So if you hear a sound, if you bought the Soulposition record and you thought that sounded a little bit like whatever, that’s a failure on my part. I don’t want that. I always wanted in everything that I make to be unique. But that’s a goal you can’t achieve. It’s not a realistic goal.

What does the title Since We Last Spoke mean?
Yeah. It was just a, uhhh, basically, I got better in what I do, and this record is more focused musically.

So it has nothing to do with your singing?
Well yeah, that too. That’s what changed. I’m getting better in what I do. That and the live instrumentation.

Cause I read you first had another title in your mind…?
Yeah, I had like 30 titles… And I chose this one ‘cause it was the only serious one and the other were all jokes and the record label didn’t found them funny at all. The first title I wanted to go with was I Need More Money And Power And Less Shit From You People, but the label thought people really gonna take it seriously. I also wanna call it The Ablum. ‘Cause I get so many demos. People constantly give me those fucking demos. And everything is miss-spelled cause people can’t spell a fucking word. And they spell it the Ablum. I’ve seen it so many fucking times. I was like “That is the most amazing song title for an album”. Just call it the Ablum.

Did you expect Deadringer to be received as well as it was? Many people consider it a classic album already.
Well, I knew it was a classic from the start. Everything I do is a fucking classic. The first couple days I was born, I knew I gonna be a classic… (laughs)

Were you surprised that, of all possible labels, Def Jux was interested in your music? Since you don’t sound anything like the other acts on the label.
Uhm, yeah a little bit. It was a gamble. Yeah going back to the classic thing, they saw the classic thing of the album. The first Def Jux presents EP was with Cannibal Ox, Me, Aesop and El on it. Really those were the five core artist of the label, in a way we build something together.

You were in Utrecht last year with El-P and Mr. Lif and I understand you also were on the Lowlands festival. How do you like Holland so far?
Yeah, I like it. Europe is fun! I’ve got no problems in here… I haven’t any unpleasant experiences here. With some neighbours I had… but I’m not gonna tell that (laughs).

What equipment do you use? Assuming you use a sampler and/or a drumcomputer.
MPC2000, Pro Tools, Keyboards.

How do you feel about people today making beats on computers?
Well, you know, whatever works, works. I don’t care. Make it with your ass, whatever you wanna do. Use your toaster. I don’t have the time to read manuals and stuff so it took three years to buy Pro Tools. But I don’t have any problems with computers…

You are quite a big fan of horn-samples right? Do you have an extensive collection of records by jazz hornplayers?
Well a little bit, it’s not all hornsamples and I got some guitar samples. I’m trying to break things up in categories so if I’m searching for something I know where to look.

In an earlier interview I read that you consider Special Ed’s Youngest In Charge as one of the best albums of all time? What do you think of Special Ed’s later work?
I think that Legal is arguably the most slept on rap record in the history of rap music.

Are there any other MC’s from back in the days that have been very underrated in your opinion
Uhhm, I don’t know. Steezo I guess. Not really.

Are their any future collaborations coming up?
Possibly, I don’t know what the future is gonna hold. I recently featured on the Okayplayer album.

Who would you love to collaborate with in the future?
There tons of people I wanna work with. My first choice if I have to do a record would be the guy what sings for a band called Mars Volta. They’re a rock band from L.A.
And mainstream I would produce for Ludacris. I think he’s arguably the best rapper that’s on right now.

Any last words for the readers (and viewers) of Hiphopinjesmoel (Hiphopinyaface)?
Thanks for your support. Thanks for buying something, whatever that may be. Thanks for doing the interview even though you are a hiphop magazine.