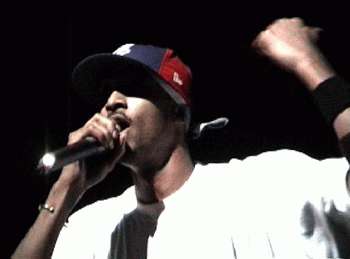 Can you introduce yourself to the visitors of our website, since we know little about Pacewon here in Holland?

Okay, I like to introduce myself. My name is Pacewon. I’m a member of The Outsidaz. I’ve been featured on records like The Fugees’ The Score album, I was on Cowboys. I was on Rah Digga’s album on the track The Last Word. I also was on Redman’s album doing Bricks Two. I’m on Morcheeba’s album right now. It’s called Charango. And I’m also touring with Morcheeba right now all through Europe.

So what’s bringing you to The Netherlands now?

Right now I’m coming to promote my record coming out here. It’s called Won, for Pacewon. It’s got producers like Wyclef Jean on it. It’s got a production from Rockwalla. I produced a couple. A production by Ski from Roc-A-Bloc. He made beats like on ‘Who you with’, ‘Streets is watching’, ‘Dead Presidents’ for Jay-Z. I hope you all like it. It’s got people like Rah Digga on it, Wyclef Jean, Kurupt from The Dogg Pound, Melanie Black from All Saints, so you know y’all gotta pick it up.

Are you satisfied with the results of your album ‘Won’ so far?

Reviews have been nice and people are responding to it. Record sales could be a little better, they could pick up. I want to go platinum in all of these countries! But, you know, we got to promote first. We got to come out and introduce me to the people. Show ‘em why they should go buy my record. Have some fun.

What are you trying to say with the title of the album, ’Won’.

Why did you choose to bring some video footage with your album?

Well, I shot a couple of videos for this album previously. Like for ’I’m leaving’ that’s featuring Melanie Black, Rah Digga and Young Zee from my group The Outsidaz. And we also got ‘I declare war’ which is featuring Eminem in the video. He plays the mayor. I go kidnapping him. I’m just trying to make some animation to the lyrics. Illustrate the lyrics a little bit and make some fun.

What was the deal with your first EP ‘The Pacewon Effect’? It didn’t come out or did it?

No, it didn’t come out. It just came out on the internet and I went platinum on the internet! ‘Oriental’, ’It’s a secret’, all that stuff is on it. I had trouble with companies. I left one company and went to another one. And now everything is right and is out.

What are your plans for the near future? Are you working on another soloproject or are you going to do an Outsidaz project? And I just heard you just got back from a studio here in Amsterdam.

Yo yo, I’ve been recording new stuff. I’m working on my next album. My new album’s name is ‘Telepathy’. That means I can read your mind. I’m getting stuff together. I’ve got producers like Mark the 45 King and DJ Shamik. And Diamond D doing some stuff. So, you gotta watch out for that. But that’s not till next year in June. So far, right now, just introducing myself. Trying to get there. And I’m gonna record a new album with The Outsidaz next year. So you all can watch for that. It’ll be coming out like October, November.

What does Pacewon stand for as an MC?

Pacewon stands for good, quality emceeing. Good rapmusic on subject matter. Not too much cursing, some inspiration in the lyrics. I represent the modernday b-boy. With breakdancing, deejaying, emceeing and spraypainting.

What’s your goal with that?

With that I’m really just trying to express myself as a human being. I’m using hiphop as a tool to manipulate life and tell people stories and my experiences.

What, in your opinion, is a real classic hiphop album?

In my opinion, The Great Adventures of Slick Rick, or maybe Criminal Minded from Boogie Down Productions, KRS-ONE. Or maybe Paid in Full, Eric B and Rakim. And then we’ve got Nas, Illmatic. There’s been some good stuff.

What are the mandatories to create a classic album?

Mandatory is: you gotta have some deejaying on it, you need to hear some scratchin’ and some cuts. You need solid production, you need good beats, you need good hooks. You need good subject matter to talk about. If you gonna talk about your life, you gotta be able to talk about it in a way nobody has done before and if they have done it before, you just do it better. And the emceeings gotta be mwoi! maakt handkusgebaar red. Timing for the MC has gotta be good. People have to wanna hear what he‘s talking about. You can’t really force it on people.

What about the connection with DJ Kool tonight?

Did you work with him before?

No, actually he worked with Redman and I work with Redman, so we bumped heads a couple of times, seeing eachother and talked and anything. But that’s it.