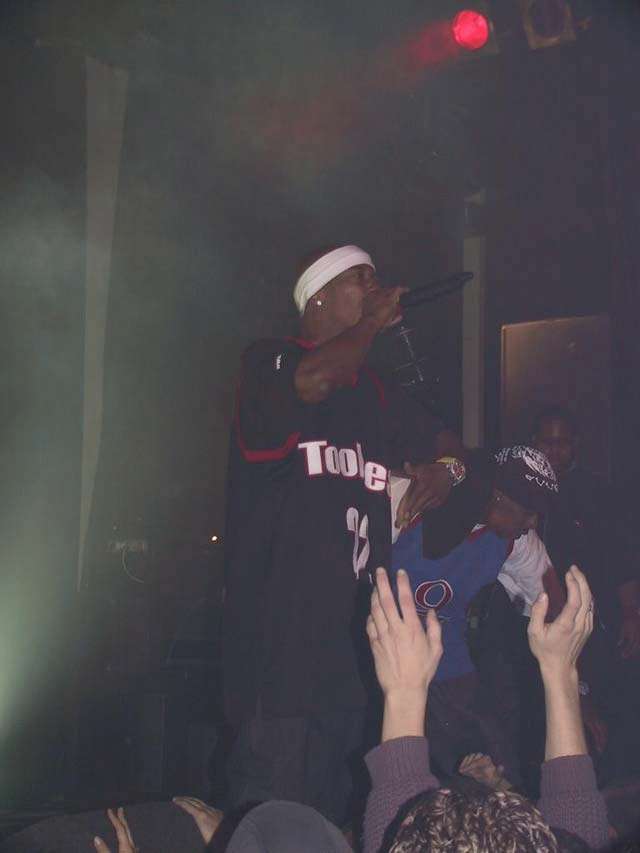 How was Poland?
Fredro Starr: Cold and poor. It’s like New York. But they love Hip Hop though.

Have you been here before?
FS: Yeah, I’ve been here. I was here with my whole crew last time. Right now I’m here by myself representing Onyx you know what I’m saying. Sticky Fingaz, he’s doing a big movie right now, I just finished doing a big movie with Ice Cube so..

So he’s not here Sticky Fingaz?
FS: No, he ain’t here man but we’re going to do his verses tonight anyway. I got a special way I do my show if he ain’t there. I mean, I’m a solo artist on my own you know what I’m saying: I got 10 movies, I got my own solo album and I got 4 Onyx albums so I’m not worried about as far as the songs we got. We got over 10 singles that we’ll be doing. But if Sticky was here it would definitely be a lot more energy, a lot more crazyness. ‘Cause he’s the crazy one and I’m the calm one so you gonna get the calm Onyx. Not the crazy muthafucka going crazy killing people.

But you brought Tha Liks with you, are you touring with them?
No, we just met them for this particular day right here. They’re going back to Copenhagen and we’re going to Croatia, so we’re going out separate ways. But its good to see veteran rappers like Tha Alkaholiks, you see them in the States and now you go to Europe you see them and shit. It’s good to see that Hip Hop is appreciated around the world, no matter what’s going on in America. You can always come over here and be appreciated. In America, they doin’ too many things over there, it’s too much pop right now. It’s Hip Pop, not Hip Hop. We with that Hip Hop shit.

So what do you think of collaborations like Redman and Cristina Aguilera?
I mean, you can’t be mad at him. That’s what it’s here for, it’s here to make money. That’s why Tha Liks is over here, we over here to make a little money and have a little fun. I feel Redman, Redman been commercial. I think he’s hiphop, he’s a good rapper and anything but he’s a pop icon. He’s doing commercials with fucking roll-ons, sprays..you know, doing big movies with Jersey films. He’s not just a regular rapper from the streets no more.

It’s been a couple of years you released your last album. What was the biggest reason for your comeback?
The biggest reason that we weren’t in the studios recording as Onyx is because Def Jam, Jam Master Jay, there was too much hands in our pockets. Too much money gotta be split too many different ways so it wasn’t worth even rappin’. Go in the studios rappin’ for these niggaz and ‘bout time you see your cut out of a group of three with these niggas taking half of what we was getting, it was like: fuck. So that’s why we started doing a lot of movies, switch up the hustle, you know what I’m saying! Like 2Pac, Ice Cube and Ice T was the first kind of rappers who really, like, break the Hip Hop movie thing down. ‘Cause Run-D.M.C., they all did movies too but they didn’t stay with it like Pac and Cube and myself, we stay with the movies. So now I got over 15 movies and 3 year of television, I had to switch the rap shit up, fuck that. I have to be paid and keep my face out there. We had to get off Def Jam, get our own record label, other people money, Sticky did a solo album at Universal which did pretty well, we did another album with Koch and we about to do another Onyx record, an Onyx metal album. We just got the dough, we probably gonna sign the deal next week. An Onyx rock album, all rock!

You’ll got the voice for it, like Sticky.
Yeah, we gonna do like we did the Judgement Night with Biohazard, the Slam remix with Biohazard. You know, I go to shows like Limp Bizkit, I go to Linkin Park and all these mothafuckas, they pay homage to Onyx you know what I’m saying.

You bring quite some hiphop anthems, like Slam, songs with a certain universal vibe which you don’t hear anymore nowadays. Was it your aim to bring back such kind of vibe with Slam harder?
Slam harder was just when you think about Onyx, the most you think about is Slam. We just wanted to rock on a dead record in a new sense, a new way ‘cause a lot of kids, it came out 10 years ago, they might have missed that era. Basically, Hip Hop is, for me, fourteen, fifteen. So when we was 10 years ago, the kids were fourteen and now 24. But the kids that was 4 years old, they’re 14 years right now. They missed that whole shit, we aiming back for them again. They might not even know that our first single was Slam, they just thinking about Slam Harder. *It’s a new audience. Yeah. But we wasn’t really trying like bring that back. It was more like a continuation because that’s what we know for, Slam.

You had a role in the well-known serie Moesha featuring Brandy. Didn’t you take a big risk to be taken less serious being an MC at the same time?
No. Nah. Had to get that money man, fuck that. Y’all mothafuckas wasn’t paying me.

You didn’t care what people thought about you playing in a serie like that?
No. I wasn’t out of character. I wasn’t playin no gay nigga on TV or some corny muthafucka, I was playing myself, I was playing the inner city kid from the streets. Basically, that’s the image I portray, I wasn’t out of my character, just on TV getting paid so the haters might haven’t like that. The haters want you to stay broke. Hip Hop ain’t not about being broke no more or about he ain’t Hip Hop no more. It’s about muthafuckas getting paper man, it’s a new age and a new day. Mothafuckas ain’t breakdancing no more. It’s not just about breakdancing, you go to other countries mothafuckas still wearing phat laces and doing graffiti. Nothing wrong with that, that’s all Hip Hop but you gotta get money from it. If you wanna be a graffity artist, get your own clothing company. If you wanna be a DJ, DJ the best parties and make beats or whatever you gotta do to elevate your game. If you wanna be a rapper, it’s not just being a rapper no more. You gotta be a marketing tool, you can make more money. Basketball players, they sign a contract and play for $ 6 million and they make more money of endorsements. Rappers, we have to know that we are endorsements. Busta Rhymes made Pass The Courvoisier, I’m sure Courvoisier should give him some money promoting their shit. I’m sure the sells went up. This Hip Hop shit, it’s not a black or white thing, it’s a get money thing, worldwide, it’s a business, it’s the top selling music right now. You got young black entrepreneurs buying G-Force, wearing 30 charats and diamonds, platinums chains, more than your house costs on your neck. It’s a booming businees, you can’t stop it. Kids growing up right now, in Poland, in Germany, they not growing up on rock & roll no more, they growing up on rap music. So when get to be 25, they gonna be more cooler, they gonna be a little bit more hipper. So the world is growing into a better place, right!?

An action movie? Yes an action movie about motor cycles. Torque is the thing that makes a motor cycle moves fast, a gear. They might change the title. Directed by Joseph Kahn, he directed the Batman & Robin.

Do you already know when it will come out?
We just finished it, probably it’s gonna come out in April/May. Look forward to the Onyx metal shit on the soundtrack, it’s gonna be crazy for that movie. That’s gonna be the first Onyx metal song from the new Onyx album. We be teamin’ up with those dudes who did Butterfly (red.: Crazy Town).

Why did you fall back on your first album looking at the title of your latest one so Bacdafucup Pt. II? Weren’t you satisfied with the 2nd and 3rd album?
We were satisfied but we just had to do it again man. Fuck it. That’s how we always feel, I mean, we’re rebels man that’s why we don’t have a lot of people on our records. We just do our thing, we really don’t give a fuck what niggas think. I’m still here, I’m not shot, not dead. 2Pac and Biggie aren’t here, I’m still here.

Lot of hiphop videoz now are getting like a stereotype thing: bitchez, bling bling ish and shit like that.
I looove the biiitchesss!!! No, on the real though.

Young kids think that life is all about that shit. Don’t you think so?
That’s happening. But you know, if you look at Cash Money Records, at their first video Juvenile, they went through a transformation. Nothing stays the same, everything changes. The bling bling been in Hip Hop forever. Talking about the big jewel chains, EPMD talking about big jewelry. It’s not all about Hip Hop but it’s always been part of Hip Hop from the start. Always, Run-D.M.C., Slick Rick, this was twenty years ago. Slick Rick had more jewelry than Mr. T from the A-Team. Now, Baby from Cash Money is the new Slick Rick. He’s just doing what Slick Rick been doing. You got Nelly, he got mad jewelry, he’s doing the same thing LL did twenty years ago. Nelly is nothing but what LL was, he’s the new one. Different people do diffent things.

You left Def Jam, do you think you miss the right connections to put out more famous features on your album?
Yeah, Def Jam is the best record label in Hip Hop. We doing independent now, we doing $ 4 a record but they are the best you know. But we had to keep on doing what we had to do.

How do you categorize your own music, as party bangers without much content or do you also want to convey a message to your listeners?
Onyx is definitely not a party bangers, our music ain’t for the party. Our music is for reballious minds, reballious music. It’s the energy, if you wanna go lift weights, listen to Onyx. If you play for a baseball, football or basketball team, you just listen to Onyx before you go. Our music is made for the rebels, for mothafuckas who don’t care. Made for these peoples like Mike Tyson. It’s like Mike Tyson and Onyx go together. Fight music! Eminem, we try to get Sticky to sign with Eminem Records, we’re working on that right now.

Do you know if Sticky’s going to release another solo album?
Yeah, he’s on a solo album right now. It’s gonna be called Guns N Roses. It will be out in February, then we gonna drop the Onyx album and than my solo. Another year, just making music. We’re on D3 now, we left Koch Records, it’s another distribution so we’re making deals and keep doing that. Then, we gonna get back to the majors.

Do you got some words for our visitors?
I want to let everybody know that we got Onyx boots coming out soon. Make sure you get that shit. Keep the muthafucking reballious music going on and make sure you get to see the show tonight. Holla. Onyxdomain.com!