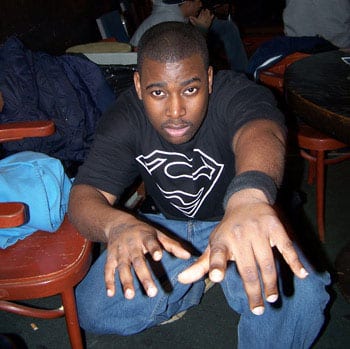 K-Hill, in what year did hiphop start for you?

As far as when I seriously became a fan….I would say it had to be whatever year Doug E. Fresh’s “Rising To the Top” came out. I was always a fan of the music ever since Run DMC but Doug really solidified things for me. Hip Hop started for me as the good ol’ fashioned, damn near extinct, fan.

You’re from North Carolina. How would you describe the hiphop scene over there and in what way did it influence your music?

Our scene is one big melting pot. Not only our music but our state as a whole. We have people here that have relocated from all over the world weather it’s to attend school, build a business, or raise a family here. So our music is really diverse as well. We haven’t really established our own “sound” yet so to speak. It affects my music in many different ways. I have an east coast sound that is undeniable but my wordplay/pronunciation on certain words definitely reveals my southern origin.

Your songs were featured on several compilations. How did that help your career?

It helped my career by placing my name in several different areas. It mixed me in with cats already established so that made me look good especially to hear that I can fit right in with the big players.

It was “Da Instigator” that got you a deal with Neblina Records. Looking back at the way they supported you over the years; did they give you the right push or are there things that they could have done differently?

Neblina did a great job with “Da Instigator” single promotion. They opened up a few opportunities for me as well. They are a great group of guys and they are going to be huge soon especially with their grinding tactics. At the end of the day though, especially when a label and an artist is independent…they have to be on the same accord….there should be no “you need us so you play by our rules” or vice versa. We need each other to make things successful. I got nothing but respect for those guys though…..they took a risk on an unknown such as myself and showed me that I did have what it takes to make some noise. I wish them the best and I mean that from the down bottom.

Your solo debut album Memoirs of a Premature Legend will be released the first quarter of 2006. “Da Instigator” could be seen as your break-through song. Last year you told me that “Da Instigator” does not give a good representation of what the actual album will sound like. So how would you describe your signature sound on the album?

More focused, serious and not as unorthodox as the single would suggest. It was a fun cut but not a true K-Hill cut. The album will be hiphop according to the kind I grew up on. The boombox sound not just the swingish, boombap but joints that you can play for the corners because that’s where I’m from and that’s what I represent.

How far is Memoirs of Premature Legend from being done?

Honestly “Memoirs” has been completed about 6 different times….I have the perfectionist disease and that’s why it’s taken so long. My writing keeps getting better, my delivery, even my voice. I just want to make sure that all of my eggs are in order when it’s finally released. It’s coming in 2006, now or never…lol.

What’s the story behind the title and who do you have on it?

My definition of the term premature legend is someone who has a special talent or an exceptional gift that can make them an icon but due to real life circumstances such as taking care of family, death, or other situations they couldn’t accomplish their dream. This project is dedicated to those who had the potential to be legendary but couldn’t finish the race.

In the meanwhile, you’re dropping a 10 song pre-album called Stamps Of Approval, October 4th. Why did you decide to drop a pre-album?

I had to drop a prealbum/mixtape to keep my few listeners pleased as well as keep them updated on where I am in my music now. I’m pretty sure that the listeners that I have in my corner now will be pleased with this project and I will gain new listeners from this as well.

I’m feeling the artwork. Your official website Kick-a-verse.com has had a make-over as well, it has the same concept as the album. Did you come up with the concept and who did the actual design?

I had an idea of what I wanted the concept to be but I would have to give all of the credit to Tobias Rose a.k.a. Mastermind. He has a company called The Praktis (www.thepraktis.com). They are a very professional and organized group of individuals and have done work for many of NC’s finests such as Supastition, DJ Chela, Darien Brockington, the list goes on.

What can people expect from the music on it?

Variety in the music but the concept is one big story of how an artist is trying to come up in the industry and all of the gripes and situations he has to encounter while trying to do so.

Will there be a single released?

Not really, this is a mixtape project. We’re just gonna shoot it out there and let nature take it’s course.

What are the main subjects discussed on the album and what resources did you rely on for the lyrical motivation?

Some of the subjects are things that may happen at the workplace, labels and how they want you to pull a rabbit out of your hat before signing you, how you’re better half may not understand the intentions of your grind, and just good ole fashioned emceeing.

What equipment did you use for your productions?

I use anything I can get my hands on. Right now I use the Roland Sp – 505, Fruity Loops, Sampletank, and the Ozone midi keyboard. It’s all about how you use your equipment.

Do you work with artists first-hand or do you send them beats?

Both. However I prefer to be there while the song is being recorded to have my input involved. Multiple ideas are way better than one. Especially in music.

You released a compilation album called “Feast 4 Tha Streetz” in 2000. You produced almost the entire album. This time the production credits are split between Khrysis, 9th Wonder. K-Slack, Muneshine and more.What made you decide to outsource the production and work with such a wide range of producers for this album?

You’ve been in contact with 9th Wonder for a long time. How would you describe your relationship and in what way does his production style differ from others?

9th is a grinder. He worked hard and it paid off. A lot of cats tried to emulate his sound but only the true originator will stand out.

You collaborate with several members of the Justus League crew. How did you hook up with them?

I’ve known L.E.G.A.C.Y way before he joined JL. He’s true fam in every sense of the word. He connected me Krhysis,9th,and Sean Boog back in the day.

Where can the Dutch hiphop heads buy the album?

For right now……everything should be available at www.kick-a-verse.com. The distribution will expand as the year progresses.

Are you doing a tour again for this album?

Not for this project. However a lot of the songs will be performed at my shows.

Right now it looks like a regular emceeing show but I’m trying to get on some Kirk Franklin ish in the future…hahaha.

Okay let’s do some word association. What’s the first thing that pops on your mind if I say: