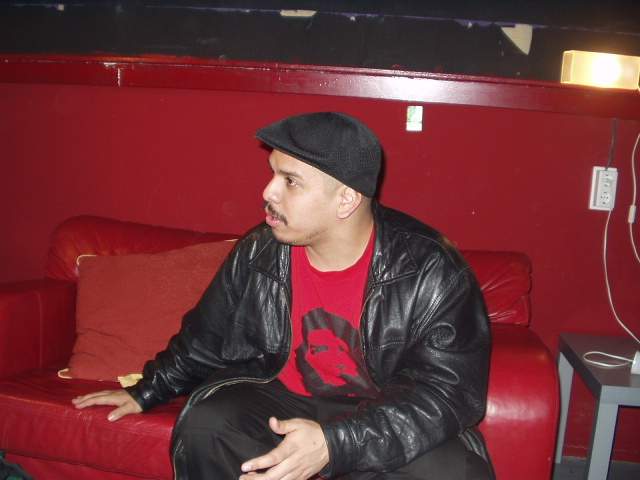 Are you enjoying yourself?

I like it out here. It’s real cool. The atmosphere is real laid back, but y’all get live. People just look at things a lot differently out here. More human and understanding especially in terms of healthcare and government-funded programs. It’s interesting to look at another system of government that’s still a democracy. It doesn’t have to be like it is in America. I like it and at the shows people go fucking nuts.

How do you know about the Dutch system? Since you’ve only been here for a few days…

I studied it. It was a political science major on the European Union and the Senior Soviet Dispute. People criticize America a lot and they ask me if I’m a communist because I have certain views that contradict with what goes on in America. But how could I be communist in the traditional Russian sense when Russia did the same thing to Eastern Europe and the Middle East that America did to Latin-America and to Western Africa. Forms of government are just another way to control people. It doesn’t matter what you call it. Russia wasn’t spreading freedom for the people in Poland and Afghanistan. They were killing people. What I do with my music: I relate to what goes on in the hood and what goes on in the rest of the world. I’m in the hood so I’m educated on what goes on there and I educate myself on what goes on in the rest of the world.
Y’all got a Prime Minister and a Queen as ambassador to the world. Funny how the Queen got a palace and the Prime Minister got a little fucking tower. I just like taking a look at the way the world works. It gives me a more cultured understanding of people that don’t live where I live and don’t go through what I go through. They got their own struggle and that’s what hiphop is about. It’s about everybody’s struggle. Since people from Holland can’t rhyme about what goes on on the streets of New York, they rhyme about what goes on here. That’s what the truth is.

It wasn’t necessarily politics. It was just the only way to find out what was going on. To read the political section in the paper; to read the history of countries. No country is exempt of sin when it comes to colonialism and brutality to African and Latino people. Holland is no stranger to slavery and no stranger to abuses of human rights. I can’t possibly forget that. The whole situation in South-Africa originates from Holland. So I think we have to start at the root and see how people who started slave-trade are now the most sensible about it, and really aren’t as racist as people who continue the slave-trade in America. It seems like people are more culturally diverse here and more understanding then in America where people should be more understanding but really aren’t. It’s even more diverse then it is here in terms of all the cultures; all the people coming there, but they still really hang on to these puritanical white, rich republican views of how they think everybody else should live.
So, it’s not necessarily politics because politics is compromise and usually the compromise of all the masses are for the advancement of one persons career: the politician. I’m not a politician. I’m a Harlem nigger. I just tell it to you like it is.
Nowhere on the news you see that America funded Osama Bin Laden in the past and that they funded terrorism. I’m here to recite that.

I used to be a battle-mc. I’m not anymore but when I was I had to be focused on destruction instead of creation. Now, I’m more about writing but I still have that destructive attitude. Because in a battle you don’t win by winning the battle, you win by winning the crowd.

What’s the feeling you have when you write?

I like to run a tight shift. I do my job and I expect everybody to do theirs. I never falter or fuck up. Y’all had the faith in me to bring me out here, to pay me to do these shows so I’m going to do the best I can. So in the future we can do business again. I’m not one of those people who get drunk or high and mumble on the stage. I take what I do very seriously. I think one of the reasons that I’m being successful is the message. I’m not like “I’m Technique and I’m the illest nigger alive”. We need to focus on the message because there are a lot of questions and changes in the world that need to be pointed out.

Do you also have answers?

Yeah, but what is the question?

For instance, in one of your songs you mention that the Taliban received financial support from America"¦

What can we do about it? Well, what we’re not doing right now. The government‘s excuse is that we gave the money to stop the drug distribution. But the primary military counterpart in the Afghanistan operation was the Northern Alliance, which is the biggest drugs distributor of the entire region.
Karzai, who is now the prime minister, was a C.I.A.-agent and he was on the board of directors for Unocal and he’s Dick Cheney’s bitch.
We start the solution by understanding the problem. Now we’re only two albums deep. You give me some time and we’re going to come across some serious solutions to the problems.
But I can’t help you with your problems if your job sucks or you aren’t fucking your girl right. People got their own problems and that’s why they don’t care about the world anymore. But they should keep in the back of their minds what is going on and they should make the change from within and start with themselves.

I usually have somebody with me to help me out but not today, because you guys couldn’t afford more than one person. Usually it‘s three people.

It works better for me. This way I can write what I want. I refuse to have somebody tell me that this song it too political. I don’t have time for pussy ass shit like that. It has happened in the past. Labels we’re like: take this song about war off. Fuck you, I do what I want to do.

How did you get in touch with Mumia Abu-Jamal?

Through the Awol Magazine.
The Philadelphia police dropped a bomb on his house back in the mid eighties killing men, women and children. He’s been in a struggle ever since. There’s a lot of evidence speaking for him but he still didn’t get out.

And some labels didn’t want that song?

Can you blame them?

Were you disappointed in the labels?

No, that’s their fucking job, to be leeches and snakes. That’s why I do my own thing now. I’m not saying that I’ll never sign but I want complete creative control. Not because I’m a control freak but I don’t trust anybody to be as good as me with the things I need to do. If I find anybody better than me doing my job I’ll sign with him.

I heard that your brother is in the army?

He‘s in the Marine Corps. Big difference. They get send in first.
But yeah, it’s crazy. We don’t agree on a lot of things.

So you have like long discussions at Christmas dinner?

We leave subjects like that alone but everybody has a different opinion. He doesn’t think Bush is a good leader, he’s just doing his job. Like a lot of people in the military bought my record and agree with a lot of things I say.

You sold a lot of copies in the States. In Holland we mostly hear your songs via the internet…

I don’t have a European distribution point. It’s been very difficult but they sell it at Fat beats and a few other stores. With the next record there’s hopefully gonna be some major European distribution and a big European tour. I’m gonna come here and destroy this place. I’m going to run through this country like Germany did back in the day. New album coming soon! Harlem Nigga!