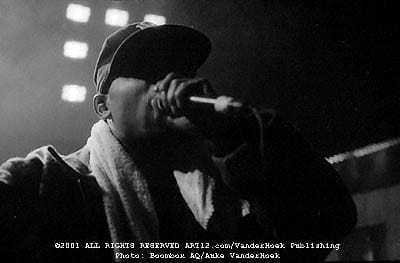 A few weeks ago I received a flyer from the Effenaar in my mailbox. It announced the first Word!-party in the Effenaar in Eindhoven, starring Group Home. I could not believe this was the Group Home from New York, I thought this must be a Dutch HipHop group with the same name. After a while, I started realising that one of my dreams would come true on Saturday 2 June: see Group Home live on stage.

“A unique sound from the streets and it’s just so sweet, my livin’ proof life story, let me break it in piece”

After receiving a lot of spam in my mailbox, reminding everybody to go the Word!-party, we headed for the south on a rainy Saturday. After 22.00 the Effenaar filled with heads, enjoying the music played by DJ SP and resident-DJ I.N.T. from the Immadodattaz. The crowd got warmed up by Shockwave and DJ Precise featuring Deams (like always dressed in red).

During Shockwave’s show, I was in the honored position to ask Lil Dap a few questions for the radio show BSNL on Radio Almelo. Melachi The Nutcracker couldn’t make it to come over to Europe to do some shows in Germany, France and one in The Netherlands, because he’s in a facility. During this tour, he’s replaced by MC Blackstar from the Brain Sick Mob.

AQ to Shockwave after the show about Blackstar: “He kept on saying he’s a grown man to impress two ladies backstage. Ain’t something right if you have to state that as an adult, is it?”

Blackstar and Jack the Ripper from the Brain Sick Mob are known from their features on Group Home songs and from the intro (Everrryy daaahaaayyy) of Supastar. This small tour is to let people know what’s up with Group Home. At the moment Lil Dap is working on his first solo album ‘I Adapt’. And after that they will drop another Group Home album.

“Got a master plan how to stack my grand, check it the poor won’t be poor and the rich won’t have shit”

The show started with the intro of the Livin’ Proof album, followed by Innacity Life and Suspend In Time. After that Lil Dap gave us a sneak preview on his album with the song Anybody Can Get It. Songs like 2 Thousand (Lil Dap’s favorite one), 12 o’clock Brooklyn, A-Train Express, Real Niggas Don’t Die, Livin’ Proof, Supastar, Tha Realness, Stupid Mutherfuckers, Brooklyn Zone. And a song with the hook ‘White people don’t love us ‘cause we live in the ghetto’. I had the feeling nobody in the crowd digged that song.AQ: “That would also be a very naïve statement. As if there are no whites that are stucked in the ghetto’s around the world. People in general don’t like you because you ain’t got none.” It was too pity that the Nutcracker wasn’t here to do his rhymes.