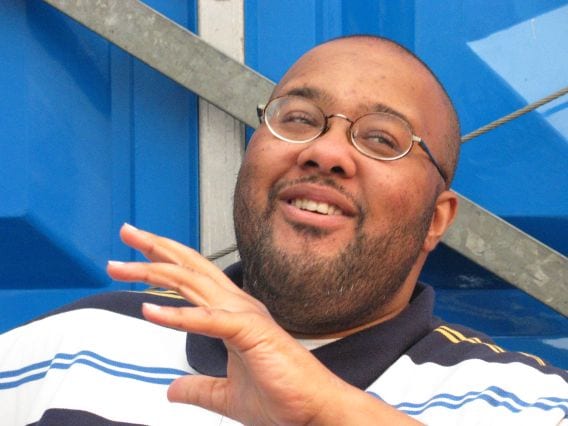 What’s up Gift, how do you like being back in Europe? Is the public different from the crowd in the States?
“Yo, I love Europe, Europe’s crazy, it’s bananas! We’ve been coming here since ‘93 and did our first tour even before we toured the States. I always love coming to Europe. One of the things I love about music is that it’s universal; it doesn’t really matter where you’re from as long as you pick up the energy.”

I was always wondering if your name is derived from Big Daddy Kane’s line in ’Ain’t No Half Steppin’: “the man with the given gift of gab”?
“(Mumbles the line I was referring to) I know what line you’re referring to but I wouldn’t say that. It’s just having to do with ‘gab’, having to do with wordplay. Being a wordsmith and being an MC and using the gift of gab. Definitely.”

How did you hook up with DJ Shadow?
“Xcel (referring to Chief Xcel, Blackalicous’ DJ, ed.) and I met in high school in Sacramento (California, ed.) and Ex went to college in Davis (California, ed.). I went to college for a brief period of time in Davis as well and that’s where we met the rest of our crew: Lyrix Born, DJ Shadow as well as Lateef The Truthspeaker. We all met in a radiostation at the campus called ‘KBBF’, where all the music people would kinda congregate.”

The Quannum Crew has remained intact over the years, other than most other hiphop-collectives. What, do you think, is the secret to your longevity?
“I think it’s passion man, we all have visions about what we wanna do with our careers and the type of records we wanna make; the legacy we wanna leave behind. And I think that we kind of drive eachother, we stay hungry and that’s what keeps us creative, you know?”

‘Blazing Arrow’ was received exceptionally well in both the Alternative and Hiphop-press over here as well as in the States. Were you surprised by this reception or did you expect it?
“You know, we put a lot into the record and it’s always good to see that people show love when you put such a lot of yourself into it.”

In addittion to your poetical rhymes, I have noticed that you spend a lot of time perfecting the musical side of your flow. Meaning that you diversify your flow and phrasing to fit the song completely. Sort of like a Jazz-way of approaching MC’ing. Do you study greats like Coltrane and Parker a lot?
“I listen to everything, I listen to Coltrane (John Coltrane, ed.) and Miles (Miles Davis, ed.), Thelonious (Thelonious Monk, ed.), I watch documentaries, I listen to Stevie Wonder, Marvin Gaye. To me it’s all music, and all music is related to eachother.”

How did the ‘Chemical Calisthenics’ track come about? Did Cut Chemist create the track with all the rhythmic changes by himself as sort of a challenge for you, or did you create the changes together?
“Yeah, with ‘Alphabet Aerobics’ Cut and I was like: “we should do something that no one has ever done” and then we came up with the idea of rhyming over the alphabet and then speeding it up. So we did that and with ‘Chemical Calisthenics’ we knew we would have to top that. So when he brought me the beat I was like: “Damn, how am I gonna do this?” he (Cut Chemist, ed.) brought me the beat and a pamphlet with some different quotes from chemistry and stuff like that. I just sat down one night and started writing. It took me a minute to write it; I did it piece by piece."

I have a promo-copy of your upcoming solo-album but unfortunately there is no listing of the producers. Who did you work with?
“The producers are Vitamin D and Jake One. To me they are two of the dopest cats, remember those names! They definitely did their thing on the album, they do their thing period! They are from Seattle, Washington which is where the album was recorded. It took about a year’s time. When Blackalicious was off the road I would fly out to Seattle and do the recording in ‘The Pharmacy’, that’s Vitamin D’s studio, and fly back.”

From your new album, I especially love the song ‘Up’. Who produced it?
“Jake One produced that one, definitely yeah that was dope! It was gonna be longer but after I had written it I felt like I’d said what I wanted to say.”

In the song you talk about an encounter with an African man who tells you that American ghettos look attractive to his people in comparison to their conditions. Are the lyrics based on a true story?
“They’re based on different stories. I didn’t exactly sit in a cab and talked to someone about that but I have had conversations with cab drivers from other countries. It’s based on my experiences, being able to see Cape Town and Johannesburg and places like Sao Paolo, Brazil. To witness the conditions in third world countries to me has been really eye-opening, you know?”

You have incredible back-up singers with you. Who are they and can we expect solo-material from any of them?
“Myron is working on his solo-record right now, he’s an incredible vocalist! And Jennifer Johns’ album is out right now: “Heavy Electro Jungle…I gotta get the title right, it’s a big title ( the album’s called: ‘Heavyelectromagneticsoularpoeticjunglehop’ ed.)! But check out Jennifer Johns’ album and check out her site: www.jenniferjohns.com .”

On ‘Blazing Arrow’ you have a song called ‘Make You Feel That Way’, which is about everyday happiness; universal feelings. Why do you think most MC’s stick to one or two subjects instead of rhyming about universal topics?
“I don’t know, I can only speak for myself. I just try to go where the music takes me and with ‘Make You Feel That Way’, that’s where the music took the words.”

Recently Questlove stated in an interview that Hiphop is still not perceived as an actual artform, that the public perception and media portrayal of it is always very one-dimensional. The Roots are immensely popular in Holland, they played for a massive crowd yesterday on this festival, which indicates a possible change in this perception. Do you think Hiphop will ever be respected like it should be, like Jazz?
“I think it will. When I was in Switzerland I saw so much dope graffiti and I was like: “they’re really official over there!” and that made me kinda realize the impact that the culture of hiphop has had all over the world. A lot of times, I think, when something is blooming, it’s different. So older people will be like: “what is that? Our generation did it different”. The same thing happened with Be-bop and with Be-bop a lot of the older people couldn’t understand it. It takes years for something to truly be appreciated as a part of history, as something that has played a significant part in the history of the world, which Hiphop is doing right now."

On the track ‘Moonshine’ you say: “Used to search for the meaning until one dark summer night one cat told me that my words had inspired his life.” Did that make you even more conscious of your lyrical ability and the power of your words?
“Definitely! I’m real honest in my rhymes. I tell on myself, I even consider it therapy. So for someone to come up and be like: “yo, I heard your song and it had an effect on me”, that’s one of the ultimate highs."

Which MC’s inspired you to start rhyming, who would you say are your main influences?
“Too many to name: Run DMC, LL, Whodini, Grandmaster Caz, T La Rock, Kool Keith, Grand Puba; I could go on for days. I’m just a fan of the music man! All MC’s I consider dope inspire me and influence me in one way or another.”

The Beastie Boys have just released a very oldschool-sounding album, the Roots are taking it back to raw beats and rhymes on their upcoming album; do you think that Hiphop is coming full circle?
“I think it always is, you always have to go back and you have to respect where it comes from and get back to the basics, so to say.” I think it’s equally important, though, that the music evolves and that the music challenges itself, to keep that balance. The music has to evolve but at the same time it has to remember where it comes from."