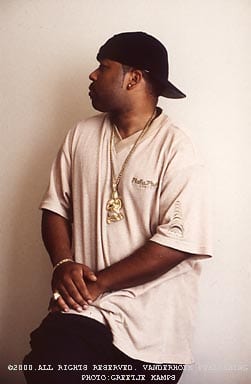 E-Life: Right now the problem with black executives is that they lack experience and clash with the white business culture. But all this will change. E-Life is on a mission that is similar to ours. Mel doing his first job as ART12 syndicate reporter: interviewing the dope Grand Old E (26-08-1999)

E-Life is a bit startled to see me, Melvin. He expected AQ, but AQ had to be in England taking care of business. For the people who don’t know me, I’m from SPEC and did the’Street Party West’ on the Mercatorplein in Amsterdam (see report, ‘Who Protects Us From You’). Interviewing the Grand Ol’ Eis my first real interrogation. So AQ gave me a couple of questions for him to answer. Here they come.

Mel: “What do you expect of your forthcoming album ?”
E-life: “I really don’t expect anything. I’m just glad I had the endurance and patience to be where I’m now. I outlived a lot of people of my time. Me and Shy Rollarocka are one of the few early days Dutch MC are who’s still out there and can live the life we dreamed about. But saying that it was all about having patience isn’t true.”

Mel: "You said on the last track ofPostmen’s ‘Documents’ ‘the scheme is marketed’?
E-life: “I’ve learned the music biz throughout the years. And people around me let me grow, like I let them grow. The Committee Gunmen for example. My character is quite strong and my motto is when I can’t be part of it, wanna own the whole shit. Because Hiphop music is an urban way of living. A record company doesn’t care or understand what you’re saying they just want to sell. That is why I need to be in control.”

Mel: “The first release was on CMC/Soul Relation but now you signed to Jive. What is the relation with CMC/Soul Relation gonna look like in the future.”
E-life: “I’m with Jive but CMC is still in between. The beautiful thing of this deal is I get all the benefits of a major label and all benefits of a minor label. When dealing with majors decisions take a long time to make, there’s already a blue print of what an artist has to act like. With a minor you do your own thing.”

Mel: “Your new album is called ‘Eleven’. Is it a metaphor or has it any meaning?”
E-Life: “Eleven is just word play. Estands for Elvis and leven is Dutch for life. Put together it’s Eleven”

Mel: “The three singles have all different singers singing the hook. Why do you change them, for every song?”
E-life: "The peeps who I work with are very talented so I try to let them shine in other ways than the public is used to them. With more days to come me and Miswere in the studio and we were looking for a voice. He said check Karima fromDignity. She made the puzzle fit. It really doesn’t matter who I work with, it just has to work and make my shit banging.

Mel: “How is your relationship with the Anonymous Mis from the Postmen? And your position in the Committee Gunmen? There is a five year age difference between you two.”
E-Life: “The Committee is a collective, each person has his own personality in this. Mis is very social he’s always looking after everybody. The Gunmen was his initiative but everyone plays his part. Sonny Diablo, U-Niq, Apocalypse, the whole crew. In this form we stand stronger and get more recognition, from the industry.”

Mel: "You represent the Docks (Rotterdam), do you feel you represent more then that?
E-life: “I look at it with levels, first and formost I represent theRotterdam Docks, after that theNetherlands, then I representEurope and last but not least the world. I don’t want to limit myself to a region or country. See me as a cosmopolite representing HipHop music.”

Mel: “You performed a long time without a regular DJ, how come?”
E-life: “I always performed with a DJ. In the beginning it was DCS, now its Precise. (c interview) Only for a couple of months I didn’t have a DJ. As a rap artist to have a DJ is a must. Turntablism is a major part of the HipHop spectrum. But finding a DJ who understands what the MC is trying to bring is hard. Therefore a short time I did my shows by myself.”

Mel: “How is your producing work in New York? Any plans to promote and distribute this record in the US?”
E-life: “The producing is on a hold , promoting albums abroad is something we’re not thinking about yet, the domestic sales are important. Then we’ll decide on distributing and promoting the album in the US and Canada. Jive is a label with a strong urban roster in the US, look at R Kelly for example. So anything is possible.”

Mel: “What will you be doing in twenty years?”
E-life: “Nobody can see in the future but inevitable is that people like you and me will be sitting on controlling positions. I hope that I can put talented people on the map and help careers to prosper like mine is now. Right now the problem with black executives is that they lack experience and clash with the white business culture. But all this will change.”

For a man who’s been in the rap game for years this is just the silence before the storm and its starting to get windy. My interview with the E Grand was relaxed and we talked longer than the authorized time I had from the record company. But next time I hope there’s a room available so I don’t catch all the noise from the lobby on my tape recorder. Greetje Kamp, who made the photo’s, had more luck. She had a room. But she would not have mind the noise. Watch out for Mel the Duke.