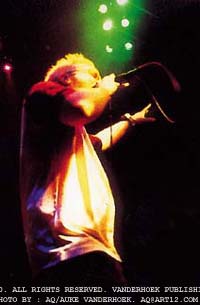 On a coffee shop terrace next door to Fat Beats Amsterdam we’re chilling with DJ TLM, The Last Mohican. For the first time this year we have sunshine. Puts on your sunglasses order some cappuccino and have some fun by watching tourists who are wasted. Hey, it’s Amsterdam.

Thought it’s a little bit strange for the peeps hanging around FatBeats. Normally we hang out and have fun. Now we hang around, have fun and do an interview. Doing our business, keep on rocking.

DJ TLM is busy with many things. From a radio jock to a party rocking DJ making tapes. But don’t forget his show with Brainpower. He’s performing with Brainpower and not just as back up kid that does a little bit of scratching. People asked him to do that, but nah, he’s an artist not a puppet on a string. Although some plans for touring sounded fun to him. He does back up vocals, scratches and spins, being a full part of a duo. Five years ago he started paying dues as a DJ. After playing every week for free, rocking party’s underpaid and making radio for even less. Now for two years he’s getting somewhere and starts to receive props. But what is next? Can’t make no money with black music in the Flatlands.
TLM: “No, I will never get paid. But I love it. I can hear the music I love, all day long. I really do like HipHop music.”

“The feeling to rock a crowd does it to me very well. It’s fun to hear your own music in a loud volume. But it’s even more fun to see other people have fun with your flavor. Turntables are my mission. Even if I would come to the editorial office of ART12, and I see two turntables with a box of records, I will check them. Ready to jump on it. It’s an addiction. Addicted to the needle!”

At this point I noticed we were still talking in Dutch. Not that it’s a problem. But I have to translate the whole interview into International English. And that’s a problem, because I have to pick the words TLM would have said if he had spoken English. And that is not all right. But hey, we just continue in English. Some Dutch and English tourist looking up strange and in an amused way. Now paying even more attention what these B-Boys and one very laid back B-girl Mickey are talking about. Well Mickey isn’t talking, she’s to concentrated reading a German graffiti magazine.

What makes TLM special? Well nothing in particular. He’s just a very good DJ with still growing skills. Doing many things and has an impressive charisma. But what does he try to do, what is his specialty?
TLM: “Basically what I try to do is to do all aspects of a DJ. Not only party DJ-ing or making tapes. But also turntablism. Getting better skills for DJ battles. There are specific battle DJ’s who practice eight hours a day in their bedroom only scratching and juggling for battle skills. But I’m enjoining the party’s as much as possible. That’s why some people are evolving faster then I on the battlefield. I’m also concentrating on the best way to rock a party. You have to feel the crowd. I’m getting the hang of it right now.”

On theTurntablized ‘98 DJ TLM also performed. All the DJ’s showed good skills. But the show element was lacking including his. The older generation at the editorial talked about it and came to a conclusion. If you did the same thing five years ago you would have been kicked off stage. The older cats at the editorial, including me, were suprised about the difference between the report on ART12 and the report on TMF’s The Pitch. The reports showed a difference in demand for quality. The ART12 and The Pitch reports were very positive. The older reports didn’t think it was good enough. But hey, you have to give youngsters a change. But how come this difference?
DJ TLM: “I don’t know. The technical skills have grown since back in the days. You also have a lot of new techniques now days. You have different battles where you in. DMC battles still got show elements in it. The ITF tries to get it more technical. Euhm, I’m looking for the perfect combination. People were easily impressed five years ago. They didn’t know the technics yet. If I would do some fast back spin and my hands on my back people would go ‘aaah’.And if people would see it now and never seen it before, they still would be impressed. But now they used to that already. I know that the people who are coming to watch want to see a show. But the jury, who I’m supposed to impress, are looking more at the techniques.”

It’s a sad thing when a jury decides, that’s why we put up School Of HardKnocks together with Just4Fun and Nes Productions. The people and only the people decide who wins. Play what the people want.
TLM: “Well I did read the regulations of the ITF battles and they specifically mentioned that body tricks will not be comment, point wise. Why not? It should be involved. A good combination of show and also showing good skills.”

As he mentioned, it’s not the only thing he’s busy with. Right now he’s talking with a radio station to get his HipHop show back in the airwaves. His radio show was taken down after the station had troubles with the finance. We will keep you informed. He was also involved in a radio show on City FM but they went commercial dropped all black music shows. Loving to make a show. Doesn’t matter if it’s local or national. The idea to host a radio show on ART12, global, gave him a big smile.

On the mix tape front he already dropped 8 tapes. Number ten will be special with as many MC’s on it as possible. The way he makes his normal tapes: just easily to listen to it. Not too many scratching that will get to irritate you. Just phat tracks which make the tape too short.
DJ TLM: “When it’s finished you just want to turn it, to play it again and again.”