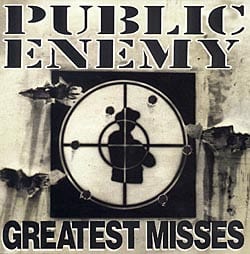 Public Enemy released their new album some months ago, 'There Is A Poison Going On'. A European tour is coming up (September 2nd Paradiso, Amsterdam) and Chuck D just did an interview tour. The national Newspaper wrote about him. Trying to point out that he's a 'over-reacting-black-with-that-HipHop-culture', is wrong and doesn't even matter anymore to todays HipHop.

“Ooh those blacks, you know”, the papers go, there is a story going on."

Public Enemy released their new album some months ago, ‘There Is A Poison Going On’. A European tour is coming up (September 2nd Paradiso, Amsterdam) and Chuck D just did an interview tour. The national Newspaper wrote about him. Trying to point out that he’s a ‘over-reacting-black-with-that-HipHop-culture’, is wrong and doesn’t even matter anymore to todays HipHop.

Well why is it when a black man stands up to question authorities and is brave enough to fight a righteous fight in a timeless struggle, that the media always want to point out the bad things and to prove he’s wrong? Well, you know, Public Enemy is the one that taught us to say ‘Fuck The American way!’ Once more the media want to pin him down because of (not proven) anti-semitism. Chuck D taught HipHop and we did learn to search for the truth ourselves. We have some questions in general to point out the one sided covering of Public Enemy by the national and international media.

The Anti Defamation League in America accused PE of anti-semitism because of the lyric ‘More Dollars more cents for the big six/another million led to bled claimin’ innocence’, Swindlers Lust. The big six are the six big record companies in a million dollars business. EMI, CBS, Warner Bross, Universal, Columbia and Polygram. Polygram was founded by Philips in Eindhoven, The Netherlands. PE had trouble with the ADF earlier. When Professor Griff left the band. According to the media because of anti-Semitic comments, in his book ‘Fight The Power’ Chuck D explained the real reasons why Griff left. Griff had to babysit Flavor Flav often and these two were kind of totally opposite characters.

On the question how Chuck D answers the charges of anti-Semitism against the track ’Swindler’s Lust’ he answered in NME: “In Schindler’s List, Spielberg was talking about the pain of what he visualized in his people, and I’d just say for me as a black man artist in the music industry, the pain I visualized was ’Swindler’s Lust’. The swindle of the music industry has really been one-sided when it comes to black artists, especially in HipHop. People have taken it as an attack on ’Schindler’s List’, like it’s me saying Jewish people run the music industry, which I think is stupid and I wouldn’t say it. But I would say that everybody had their piece of taking the soul out of black folks and turning us into jokes, even black people themselves. Anybody can be a swindler. People might say, ‘How could Chuck D play around with Spielberg’s creation?’ But I’m like, ‘Why the fuck not? He’s not God!’”
And we say: why did Spielberg only portray white American soldiers in ‘Saving Private Ryan’ who were liberating Europe? It was a world war. Where were the rest of the allied forces and where were the many blacks? Ofcourse, it is a shame that 6 million Jews died in World War II. ‘We must never forget it so it never happens again’, is what we are taught by the powers that be. And that is good, because it must not ever happen again. Although it kind of happened again in Kosovo.

Well Public Enemy tells us the rest of the story, but the only thing the media try to do is to take them down. Talking in the sense of “That HipHop/Reggea music with those blacks, you know what I mean.” If we know? Well we are that HipHop culture. We are those blacks, brothers and sisters and the ones running with them. And we definitely know.

In the last printed ART12 we had the honor to run an interview with Chuck D. It was written in Dutch and not for everybody free to access. We translated it back into English and run it once more. The interview dates from spring 1998 when he was in Amsterdam and Rotterdam to promote his book.

Chuck D: Fight The Power
“Chuck D is the one that pushes the button that blows up the governor.”

(Not so) long ago Tupac and Biggie got killed. That was sad but you could see it coming. Just two talented cats who did live the street life that brought them up and took them down. Although it had a big impact, it had no big consequences. In a country where even the president was killed by their own FBI everything is possible. And because they questioned authority and fought for their people in the struggle Martin Luther King Jr. and Malcolm X were killed some later. In a country were the powers that be handle strong opposition like that, you hold your breath for a fearless like Chuck D. With his group Public Enemy he rebels without a pause against the ‘American Way’. He became a great leader of the HipHop community in his own land and abroad. With his work he points out the things that are not right, gives hard critics and accuses. With this he rocked the boat that even the Titanic and the Bismarck together couldn’t match. With this he got many dangerous enemies. You must be a brave person to do what he does.

AQ: “How do you handle the thought that you could get killed like X and King?”
Chuck D: “Yes, well it can happen… But that doesn’t scare you to do the right thing.”
He answers with a smile. A twinkle in his eyes tells it’s a fear he learned to live with. But that can’t suppress the fun. You would expect a very serious and sober man. In fact he is a very happy, nice and modest man He has a phat pack of grim humor too. Most striking is that he is at ease as can be. In his presence you feel his power and become at ease yourself.

He did visit Amsterdam and Rotterdam to promote his book that he wrote together with Yusuf Jah. Emerald Beryl translated it into Dutch for Vassallucci Publishing. Chuck D on-stage after receiving the first Dutch copy: “I’m proud that it is translated into Dutch and how is it called in Dutch, let me see…? Oh, haha it’s called ‘Fight The Power’.” It would be very wise to read it. (If you don’t understand Dutch it would be better to read the original English version). What is it all about? The book is based on the many conversations D had in the years of his career. Written in a laid back relaxed style. Talks about funny, amazing and striking events mixed together with hard critic and accusations.

character on the barrel
The book gives you a look behind the scene. How he experienced all the things that happened. At the same time the book is a good foundation for a healthy discussion as it is just fun to read. Who ever thought that Mista Chuck designed the P.E. logo himself? For the silhouette of the character on the barrel he used a picture of T La Rock. And about the time he met Flavor for the first time in the radio studio he was working: “That was the first time I saw Flavor. He had a box of Player cigarettes with him which just came on the market that day. He had scratched the logo away to make the impression that he had his own brand of cigarettes. After that he started to do something with my keyboard. So, here was a black man with black jheri curls, dressed in black with a black box of cigarettes doing something with my keyboard. Well, at least we knew that he was black. Everybody in the studio had to have a function to justify his attendance. So his became answering the phone, write the message down as readable as possible and pass them to mr. Bill.”

Public Enemy started with having big influence on the American scene. Soon later their influences became world wide. Sticking is that he noticed the importance of the European HipHop scene for PE very quickly. Through the years and all the travels he made he could broaden his view.
Chuck D: “In America you only hear, see and read about what is happening in America only. You don’t get to know what happens abroad. America is right and everything abroad is wrong and doesn’t matter. America is a very scary country.”

Like he said to Vrij Nederland, weekly opinion magazine: “America is the world champion in dumbness.”

Chuck D: “Only when you receive a good education or are traveling you will learn and see how the real world is. If you scrutinize that, you’ll see that New York has a lot more connections with Europe speaking about influences than the rest of the States. East Coast ends already at Detroit. After that, it’s one big West Coast. New York’s roots are a lot more multicultural then the West Coast. ‘Bum Rush The Show’, was a lot better understood in Europe than in the rest of America. While the European audience consists out of whites for the half.”

AQ: “If you have focussed look, you see that the struggle, the fight against racism and other injustice is a worldwide fight. How can the HipHop community unite so we can form one big army that can fight battles on different battlefields?”
Chuck D: “The only thing you can do is to get individual knowledge. And to put good above evil. That is battle number one. You want that people will think for them selves and are critical on the information they receive. You don’t want that people are led and believe everything that is told to them. Those are the first steps. And when people know each others background and can look to the whole picture. That is what HipHop has reached in the past years. Knowing the differences, dropouts and each backgrounds.”

Genelva: “You say that we have to learn our background. But it is very difficult for black people to receive knowledge of their own background, about black history.”
Chuck D: “That is because we don’t have control over the newspapers, institutions and education. We don’t have any control over history.”

Genelva: “Is there a way to get this control?”
Chuck D: “You have to win that control by demanding it as a people. There are some people responsible for all these factors. You have to identify them, so they can be held responsible. You can’t just say it’s the government. The government is made out of individual people. You have to call them to account. That has always worked. The whole idea of having power is to lead the people as sheep. ’Don’t complain! You have something to eat. Don’t speak your mind because everything is all right’.”

Genelva: “That is the way black people are always handled like that.”
Chuck D: “Well, the have-nots, those who don’t own anything. Not only the black people, but all people have a class struggle. Racism is only one layer in the power structure. If you take all racism out you still will have class struggle. Then you have to break through that layer. After that, you see how everything works and suddenly you are ‘equal’ and ‘the same’.”

AQ: “But some are more equal then others.”
Chuck D: “Right! Heaven and hell are not things when you are dead. It is now, what you make out of it. People who don’t think for them selves, have no own opinion, are given hell. And are kept away from heaven.”