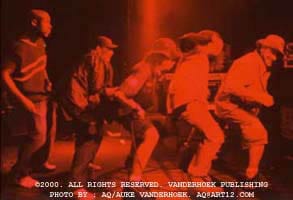 The Arsonists already dropped three 12". On July 13th their debut album will see the daylight: 'As The World Burns'. On Matador Records, www.matador.recs.com. (14-05-1999)

Their name is the ‘Arsonists’. The first three 12" were independent releases, pushed by Bobito. The first two are still available,‘The Session/Halloween’ released by ‘Fondle ’em Records’. And ‘Venom/Seed’ on ‘Serchlite Records’. They also did some featuring with Shabazz and Non Phixon. “International we like to do our thing.” Already toured for three times in Europe. "Getting it to all those HipHoppers from all sides of this planet.

AQ: “Where did you start?”
Q-Unique: “We started from Planet Rock.”
Stray:“Basically we’re from all stretches of New York. We all met at one point in time. From there on we just expanded. Like a water drop hits the water. We expanded out and we became something. We did our first joint and that was ‘Halloween’. After that we did ‘The Session’. Bobito heard it and put out for us. Ever since then we are doing mad shows. Doing our thing. The second joint was ‘Venom/Seed’.‘Pyromaniax’ will be the next single and ‘As The World Burns’ will be the album.”

Arsonists on stage are not just a bunch of rappers dropping their lyrics and trying to be cool. No, they have studied choreography and put this in practice on stage. Dropping lyrics and communicate is not only done by the mouth. But most of all by body language. The men make sure it’s also fun to see them perform. How would they say it them selves?

Stray: “We’re the most entertaining thing on stage.”
Q-Unique: “We put all lot of hard work in our shit. What we do is more then just try to make people scared or intimidate the people with what we get to say or do physically. We put all the elements we were doing when growing up. We all used to breaking, DJ-ing and doing graff. And if we can incorporate that in our stage show, that is exactly what we gonna do. We are not limiting our selves being ‘lyricist-on-stage’. We gonna do everything we can to HipHop. So everybody that has experienced the HipHop vibe, you come and you experience it when you see the Arsonists show.”
Freestyle: “Typhoon is our DJ for this tour and he is as well the person that is taking us all over Europe right now. He’s the one that believed in us. He was like ’I’m gonna take these cats to as many places I can’. This is the third tour in Europe. And we don’t have an album out yet. We didn’t fly out over here to do one show. We will rock as many countries as we can without an album.” See for tour dates their website.

AQ: “What is your main goal? To get rich or just have a nice job?”
Stray: “Our main goal is to…, ten years down the line to be on a legendary status. Like you would say: ‘KRS, Arsonists, The Roots…bla,bla.’ We are not looking to be here for five minutes. You go get us and we make some quick money or whatever. If it was about money, we all had opportunities to do money. We are all educated and did our thing in New York City. We all have something to fall back on. If we want to make real money, we can do that. But the thing is, we love HipHop. We have been doing this on 4Tracks etc. Up until now. Obviously, money is something that keeps us to come out here. To do what we have to do. To feed our children and pay the rent. But that is not the main focus. The main-focus is to do what we were doing when we grew up in New York City. When we was getting scrabs from the floor. Spray-painting on the wall and getting caught, we all have done that. We have the stories and the reality check to proof that.”

Q-Unique: “We’re making music really for our selves. Where that leads to is… We see all these individuals throughout the world who are appreciating our music. How a lot of other artists say we’re taking this to another level. ’I’m going with another level shit’. We are really doing this to give our time, our growing up throughstresses and problems and stuff. This is what we have to put in our music. This is our style of music. We noticed that there are a lot of people, that are taking their liking to it. And what happened? It brought us together. We wouldn’t have met you doing anything else. It’s a dope experience because we meet different individuals with different backgrounds. Been raised differently and it all comes down to we love HipHop. On top of that, HipHop gives us a family. Without HipHop you wouldn’t have been here putting a mic into my face and making pictures of me. Without HipHop there is a lot of shit. You know what I’m saying.”

“First it was just fun. I loved doing it because I was in the middle. I loved it, everybody watched me in the crowd. Then we toured and everything. I experienced there was a bigger world then where I was at: hanging on the corner, chilling with my boys. I totally see it different now. I love HipHop even more. There is nothing that can stop it even when I’m not in this group anymore. It will still go on, it will still be in me. I just love it.”