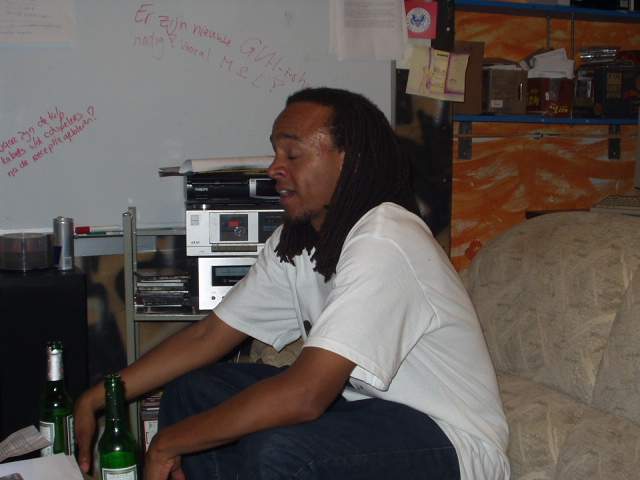 Could you give us an extended introduction on who Approach is?
I’m a dude that loves music and I want that to come across. I used to break and never got into rhyming until ‘95. In ’97 I started making music and in ’99 my first tape came out. In 2000 I made my first beats and started making ’Ultra Proteus’. I’m also working hard on Datura Records. I’m basically a hard worker and a real big fan of music and all the fans should know that every dollar they spend will be worked hard for. I’m not a ladies man; not the urban dream: I’m a music nerd.

You started with dancing, why did you switch to rhyming?
It was just progression basically. I grew up in a house full of funk and soul so if I could sing I’d be a soul singer. Now, in my music I try to bring back the groove and put up the entire show. It was just a natural progression, it’s just something that happened.

You showed some really good freestyle skills on stage. When you first started rhyming, did you start with freestyling?
A 100% freestyles. The first thing I ever wrote was ‘Weatherthoughts’ and ‘Ultra Proteus’. I was freestyling for 5 years before I ever wrote something. I was rolling with cats that were freestyling so it never occurred to me to start writing. I just started writing when the beats started to progress. I’m still improving daily on that aspect.

Mac told us he wants to focus more on writing then freestyling. Is that what you want to do too?
I battled to gain reputation. That was the easiest way. I’m not a battle MC, I’m more of a songwriter and an arranger and a floating spirit. I’ll continue to freestyle but I’m not a battle MC and I more like putting songs together. I’m actually doing more freestyling now to keep those skills sharp. So when the cd skips I have something to say to people.

So talking about songwriting, what can we expect from your new album?
You can expect funk! It’s actually an EP that became a full album. I want people to take this cd home and think: “I never heard of this but this is really gin.” You can also expect some guitars, horns and ‘throw your hands in the air’ on the album. I don’t make only straight-up hiphop records.

With ‘Ultra Proteus’, are you trying to get the funk back into hiphop?
I’m such a fan of People Under The Stairs and Quantum Records. I just wanted listeners to put on the album, hear horns and big bands and after listening to it they must feel better. You shouldn’t listen to it because I’m the greatest rapper or the greatest producer; you should listen to it because the record makes you feel better, and that was what I wanted to bring back. Music like Black Eyed Peas was making in the first couple of records and Hieroglyphics is still making to this day.

Talking about BEP, what do you think about their style switch?
I understand why they did it because they’re the type of group that are extremely dope and their talent was shown for two records. But they’re on a major label walking on a thin line where hiphop-heads were not really embracing them. They could go one way or another and they made the decision amongst themselves to sell records. I was a little taken back. There’s elements of the new stuff that I don’t like, but I don’t think they did a complete 180. Just some of the stuff that was cheesy before, they just turned that up. I really hope that now they’ve sold a million records they will go back to the stuff they did before because I’m a big fan of their old work!

What about the live band that you did, for instance, ‘Funk Reaction’ with?
At the moment I’m just here with DJ Skew representing ourselves and the band is playing with different bands. We’re here building a name for ourselves so we can regroup with the band and we can come out here again together with the band.

Do you think a band is necessary to bring the funk back, because on the record you also have Automato featuring?
I like the band because I’m spontaneous. Sometimes I wanna go into a David Bowie-song and sometimes into A tribe Called Quest-song, or a song I just wrote on the bus and you gotta have a band to do that. I love the freedom of a band.

What does ‘Ultra Proteus’ mean?
It is a mini program that I used to work with in school to make music with, and because my name is Approach people call me ‘Pro’. I made a funk record and now people could call it ‘Ultra Pro-teus’. It just sounds like something that’s funky and live. I’m corny, I know (laughs). I also hate my picture taken so I never want to go on the cover (laughs again).

What does your production setup look like nowadays?
MPC2000 Excel. I’m definitely an MPC guy and I bring super talented musicians in to play the horn or the guitar. I like the fusion of samples and live instrumentation. It allows you to take a sample that’s really strong and then take a musician to really carry it.

You have a lot of beats from different producers. Could you tell us how these collaborations got together?
Nezbeats is my roommate. He’s in the Mighty Architect crew. We took a track and switched the words so we made the remix an actual new song.
Oh No; I just wrote him an email explaining who I was and what I wanted. Oh No was an amazingly cool cat, I never met him face to face but I sent him the music and he called two weeks later. He said: “There’s a track in the mail, it’s done” and we started talking and hopefully we can do more because I’m a huge fan of that guy.
Automato was also hooked up. Automato is on a sister label of Coupe d’Etat so they did that as a favor. I love all their remixes. Nobody knows Automato yet but they’re gonna be big.

How did you get connected with Coupe d’Etat?
I knew a cat that wanted to put my record out, named Nick Gordon. I send him the record and he started playing the record in New York for various people. Coupe d’Etat picked that up and a year and a half later we got a deal.

What are Erik and Howard like (both from Coupe d’Etat)?
They’re cool cats!. I run my own label (Datura records) so we know the routine, but we wanted to take it to a higher level. We weren’t really jumping to sign, but we believed in Erik and Howard; they take us into the business without making it business. That’s what we like; we just want to make music from the heart and put out a quality product, not undermining the audience.

How’s your relationship with other artist from Coupe d’Etat?
I don’t know anybody else. All the artists are really spread over America so it’s like: You do your part and I’ll do mine and we’ll connect at the end of the road. It’s less pressure for me because I’m the baby on that label.

What do you think about MC Paul Barman?
Hiphop is a wide open door, there’s many different elements. Everybody has the right to experiment.

A while ago, Coup d’Etat released “A Blow To The State” will there be a sequel?
I want to be on one of those, man! Y’all need to write them on www.coupdetat.tv to have them make a new one. I want to make some original shit for that.

Coup d’Etat got a political vibe to them, do you share that?
Yeah, the vibe is to not conform. If you see something and it’s not your view, don’t settle for it. They’re representing a movement of artists first and dollars later.

Where does Coup d’Etat stand between Def Jux, Rhymesayers, Stonesthrow etc.?
We’re the only independent label that has an artist from the West, the Mid-West and the East. We’re the only one that has all areas covered.

How do you feel about touring?
I love it. I could tour every day of the year! I get tired sometimes and I like to sit at home as well, but I love touring to show people what I made and share that together. Everything is about trade. I have beats, you have rhymes; let’s trade and share.

What is touring in America like?
In the Mid-West they get live and energetic. Sometimes you gotta work a little bit harder because everybody raps. With everybody rapping it takes more to impress them. If you communicate well you can get it out of them.

Since it’s almost over, how did you like this tour?
It was great, I had one of the best times ever on the road. I have no complaints and would do it over in a heartbeat.

Which show did you like best and which one was the hardest?
The best show would be either Poland or France. It was live over here too.
The toughest one was Amsterdam. It was really, really hot! People seemed high as well, and it was 2.30 when I played. There were also a lot of other shows going on. It wasn’t the worst show, but it was the toughest show.

What about peace? Will there ever be world peace?
I think it’s possible because one thing civilizations of all times have done is adapt. And in war you can only destruct and destroy to avoid. Then it comes to a point where you just look back and rebuild. If we rebuild, now we can evolve and get better.

What about the elections in the United States? Who will you be voting for?
That’s one of the questions that I don’t like to answer, but I will NOT vote. It’s hard because people died in giving me the right to vote but I can’t choose between the lesser of two evils. I’m not gonna contribute to something that doesn’t work like the American voting system which can be manipulated.