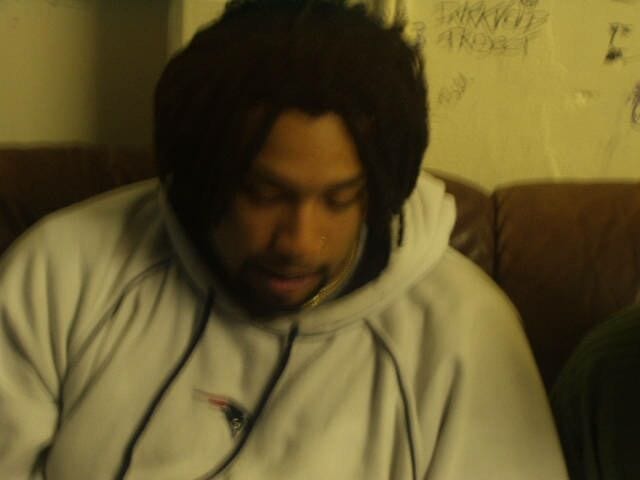 So Akrobatik how are you doing and how has the European tour been so far?
It’s almost over now, the tour has been positive. We’ve had some incredible shows, we’ve been to six different countries or seven. It’s just been amazing, all of the people coming out. Tonight was one of the smallest shows of the whole tour. A lot of shows were like a thousand people like Munich, the Hiphop Camp in the Czech Republic was like eight thousand people. So it’s just been a lot of fun, meeting a lot of people and really getting to build our name here in Europe. So it’s been good.

Do you know what happened to Ras Kass, he got in trouble with his label and got in jail, what are you thoughts about it?
Well, Ras Kass if I remember correctly, is not in jail because of anything that happened with his music. He’s in jail because of a drunk driving charge or something like that. But he wasn’t going to turn himself in until his record label gave up the masters to his album, because they wouldn’t release it. So it’s two separate things, I don’t think that we’ll ever see a situation where artists go in to jail because for situations with record labels. It’s not a criminal offence, it’s a civil offence. You might own your record label a lot of money, but you can’t go to jail for anything like that. Ras Kass’s reason for being in jail is totally different, I wish him the best.

I’ve also had a quick chance to talk to Edo G at the Planet Rock event (Eindhoven/Netherlands), the same event Mr Lif did a show a couple of years back. I talked to him about the Boston scene and he remarked that it is highly driven by consciousness. Why is the scene in Boston so conscious?
I think that Boston has all type of rappers. There are a lot of gangster rappers, there are a lot of backpack rappers and there are a lot of conscious rappers. Based on the way the scene is setup for the marketing and the promotions I think that mostly the conscious MC’s are the ones who are getting the most shine.
I mean I don’t even like using the category “conscious” when describing myself. I just like to make music. Not every day do I feel like I’m going be some warrior for world peace or something like that. Some days I get up and I just want to kick somebody’s ass. I might not do it but that is how I feel and I might put it down on a record. I like to think of myself as multi-dimensional. But if you really go inside of Boston and see the artists that are not just putting out records, but all the ones that go to the open mic, make the mixtapes, go to the shows and in the crowd and in the ciphers you’ll see there are all kinds of flavours in Boston.

You and Mr Lif rocked some Perceptionist shit out there. When will the album be due to?
I think that the album will be released before the summer of 2004. We’re also going to put out an EP which hopefully be out in January or February. We want the album to follow right after that, maybe April.

You and Lif did a tribute to Public Enemy on stage. Will there be a collabo with PE on the Perceptionists record?
I wish, I don’t know them personally. Who knows? It would be definitely cool.

In what way do you think Mr Lif has grown as an artist and as a person throughout the years?
I’m really proud of him, he’s gone from being a really talented MC to one of the best lyricists in the world. He’s definitely my favourite person to work with in the whole music industry and because I’ve known him so many years, I’ve also seen him grow up just like he saw me grow up. We’re definitely really close, we have a good friendship and I think that translates in to our chemistry on records and on stage also. The same goes for Fackts One as well.

On stage the both of you have a lot of synergy. Do you plan that for the show or is it just chemistry.
Yeah, it’s just instinct. Like my body just does whatever it’s want to do while I’m rhyming, I never know what’s going to happen. It’s really like when I’m on stage it’s like I almost blank out and whatever happens happens. I take back as much as I can get out of it. Some things are things we’ve always done. Like when we do Inhuman Capabilities, there are a lot of movements and it’s become kind of a routine because we’ve been doing it for so many years. But most of it is just instinct.

What kind of vibe will the production be like on the Perceptionists album?
Just rough shit, hard shit. I feel like there’s enough soft commercial r&b bullshit out there that we don’t have to add anything to that. I think we have more to offer for that head nod shit. We’ll have some shit that will bump in the club if they play it. But the real focus is going to be just those evil sounding beats. Hard, uptempo, just bangers!

Will there be any collabo with other MC’s on The Perceptionists?
We’ll definitely do some collaborations, I am sure of that. Breeze is going to hop upon a jam. There are a lot of other MC’s that we both respect that we love to do some stuff with. That we will approach at the time when it really comes to doing the album and finishing it. But for now the focus is going to be on us getting together and writing songs so we have enough material. So that when people start to come to these Perceptionists shows the whole show is Perceptionists songs.

How did you get together with Coup D’Etat?
It was really easy, when my contract ran out with Detonator, my previous label. Coup D’Etat stepped right in and made me a good offer immediately. I was without a label for maybe three or four months and that’s it. They had a relationship with my management Metro Concepts which also manages Edo G and Rasco. So the Coup D’Etat people already had known about the Metro Concepts artists. So once they found out that I was now a Metro Concepts artist they were ready to make me an offer.

You also appeared on A Blow To The State with the other Coup D’Etat members. Will there be hook-ups with someone else of the label?
There’s always that option. Fackts One just did something with J-Live. As of now I haven’t done any collaborations yet, but I like to do something with Rasco but he lives in California and we’re not that close. I really only met him once or twice, but I’m definitely a fan of his music. For now I’m working on my projects, I really don’t like to think about who is on what label and things like that I just want to make my music.

I’m going to bother you with one more label question. The Perceptionists will that be out on Coup D’Etat or Def Jux or somewhere else?
You might want to ask Coup D’Etat and Def Jux that question. Whoever makes it seem like that’s where we should be that’s where we going to go. It’s just a matter of, we’ve both been working hard now and we’re both been in the business for over five years. We’re definitely looking to be rewarded and looked out for properly, because I think that when we put our album out, it’s going to be a big project and when we tour, it’s going to be a big tour. Right now we’re just building a foundation for that and which of those labels feels like they want it the most that’s where we going to go.

You performed the track Feedback with Lif tonight, which you did with Diamond D. on Balance. How did you feel about working with Diamond D.?
Me and Lif are both Diamond D fans. I speak to Diamond a lot and he’d sure be down to at least hook us up with a beat. So we’ll see what happens.